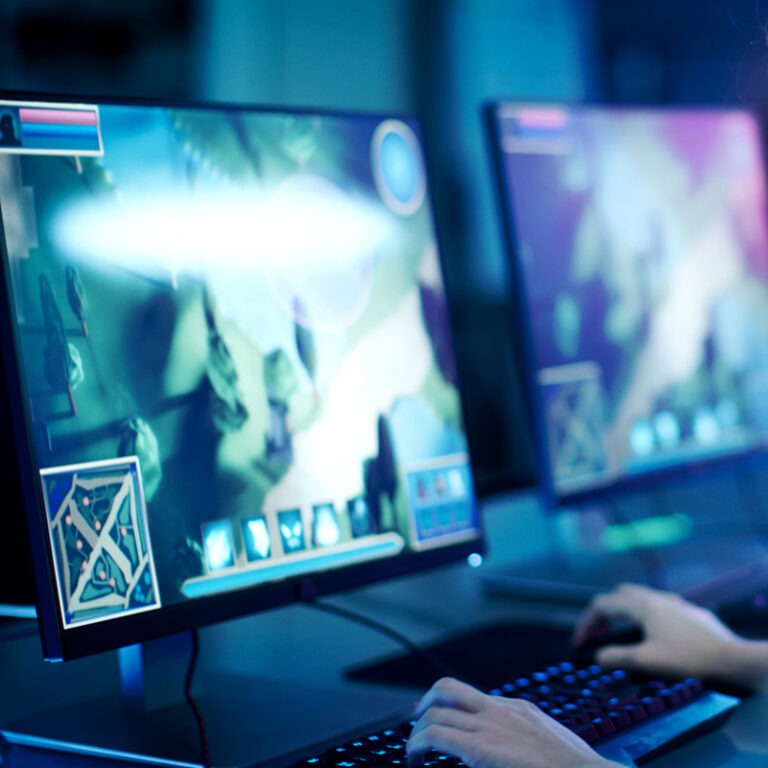 If you want to play strategy games, playing them on the PC is your best bet. Divided into several subgenres – such as turn-based strategy, real-time strategy, or tactical squad games – these titles typically place you in the role of commander of a nation or army fighting for supremacy.

The genre is also characterized by the challenge it imposes on players and the higher level of complexity. If you’re looking for PC strategy games, check out some of the best options for your computer below!

One of the best and most challenging strategy games on PC, the sequel to XCOM: Enemy Unknown puts humanity on the offensive against the alien occupation. The title has two strategic layers: the organization of the rebellion against aliens around the world and the tactical battles between its squad of soldiers.

Clashes take place in turns and force players to adapt their strategies according to the – partially randomly generated –  scenarios and the special abilities of the creatures they are facing.

Considered by AppTuts as one of the best single-player games, the title received the War of the Chosen expansion, which brings a variety of new creatures and gameplay features into the fight against extraterrestrial domination.

One of the greatest classics of strategy games for PC, Warcraft III was the title that preceded the famous MMORPG World of Warcraft, considered by some the best online MMORPG game. The title brought an engaging story, with a dense narrative – the infamous plot twist – remembered today by fans of the medieval fantasy universe.

Warcraft III uses the formula of real-time strategy games. That is, you must build your base, build your army and overcome your opponent before they do the same to you. Originally launched in 2002, it featured an expansion called The Frozen Throne, it recently received a remaster edition to an equally cold reception. 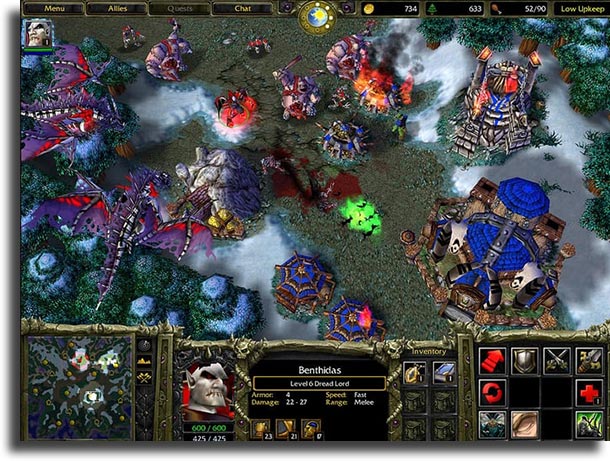 The Total War franchise is also among the best PC strategy games. Like XCOM 2, it also features two strategic layers. The first is on the campaign map, where you must manage your districts, cities, armies, and agents such as diplomats and spies.

The second takes place on the battlefield, where you must lead armies with thousands of soldiers, maneuvering them in a way to defeat the opponent, whether in direct confrontation, naval battles or besieging castles.

Total War: Shogun 2 addresses the feudal period in Japan, so samurai, ninjas, and warrior monks are some of the types of troops you will lead to take your clan to the top of the shogunate. 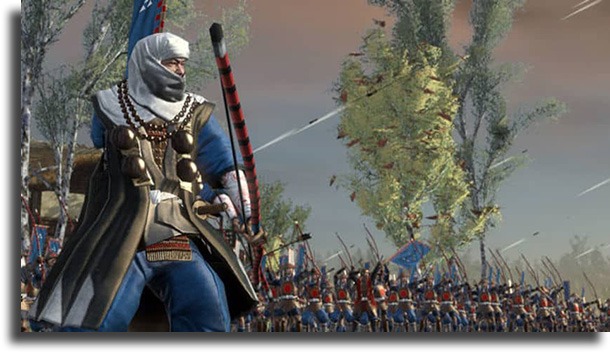 One of the best and most challenging classics among the strategy games on PC, Commandos: Behind Enemy Lines puts you in charge of a squad of soldiers infiltrated behind enemy lines in World War II. Each soldier has specific skills and equipment, which must be used intelligently, as you are at a large numerical disadvantage.

Things like memorizing patrol routes, moving stealthily, and knowing the advantages and disadvantages of each weapon or equipment are crucial to doing well during missions. The title was originally released in 1999 and has 3 sequels.

Other games similar to Commandos: Commandos: Beyond the Line of Duty, Men of War, Shadow Tactics: Blade of the Shogun. 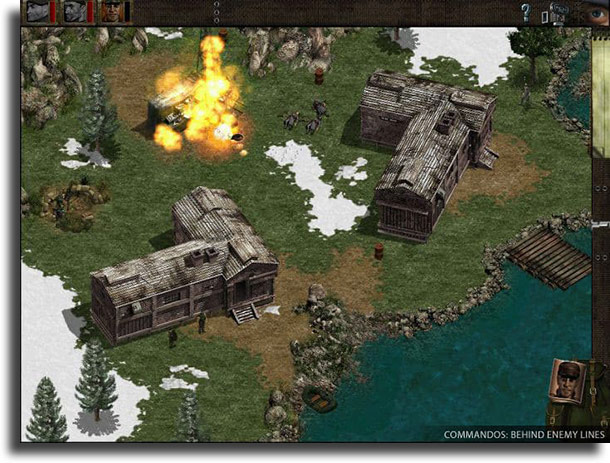 A remaster of one of the greatest classics of strategy games for PC, Age of Mythology: Extended Edition brings real-time disputes between the mythology of four different civilizations, with their deities, legends, heroes, and monsters.

Greeks, Egyptians, Norse, and even the inhabitants of Atlantis are part of the ensemble, each with a different way of accessing the powers of their gods.

Recently, the remaster has received brand new content, which also features mythological beings from Chinese legends, such as Terracotta warriors and gods like Fu Xi and Shennong. The content is called Tales of the Dragon and you can purchase it separately from the game. 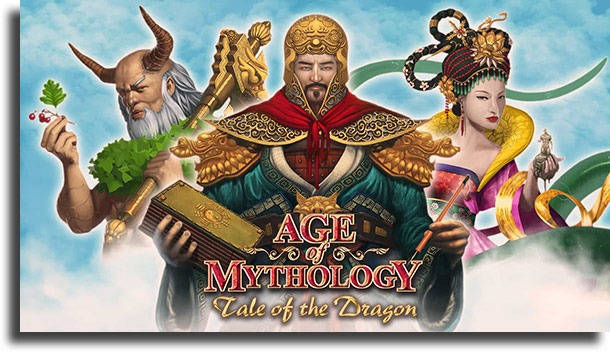 Released in 2016, the sixth installment of the turn-based strategy game created by Sid Meier comes closer to becoming the definitive edition of the game, being easily one of the best offline strategy games on PC. In charge of the great leader of some civilization in history – including the comically aggressive Gandhi! -, you must rewrite the nation’s history.

The entire gameplay happens in turns and you have to deal with all the issues pertinent to a leader: taking care of the distribution of food and happiness of the population, encouraging culture and research, dealing with rival civilizations through trade and diplomacy, as well as raising your armies and preparing them for war.

Despite the gameplay depth, the game has become much more beginner-friendly, showing tutorials for all types of action.

While Warcraft III and Age of Mythology are real-time strategy PC games with a focus on mythological and fantastic beings, Company of Heroes 2 portrays the real battles of World War II. Soldiers, machine guns, tanks and planes are the units you will command, while fighting alongside the forces of the Allies or the Axis.

The title tries to be as realistic as possible, preventing the structure from being left only in the rapid construction of a gigantic army to overcome enemies. It is necessary to think about elements of the terrain and how one unit behaves in relation to others. For example, even an army of 100 soldiers with rifles cannot handle a battle tank, as their ammunition would not pierce the armor. 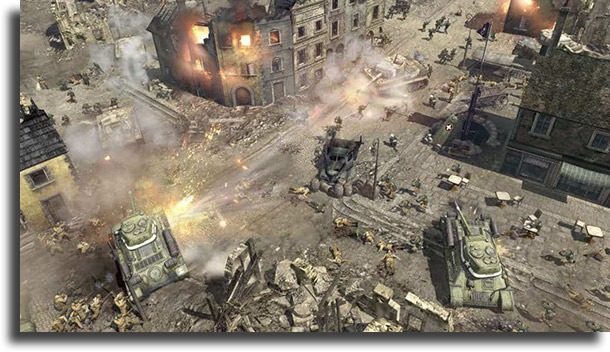 Another classic remastered with more up-to-date graphics, Stronghold: Crusader HD is for those who like to manage all aspects that involve the management of a medieval castle. Its setting takes place during the period of the Crusades. That means you need to prepare to face dangers in the desert while trying to take Jerusalem and line the pockets of the Pope!

Stronghold: Crusader HD puts the player to take care of the harvesting of resources – such as food, wood, and iron -, also passing to its manufacture, until reaching the hands of its soldiers, and then using them in their battles. The title features historical missions inspired by the three Crusades that took place during the Dark Ages. 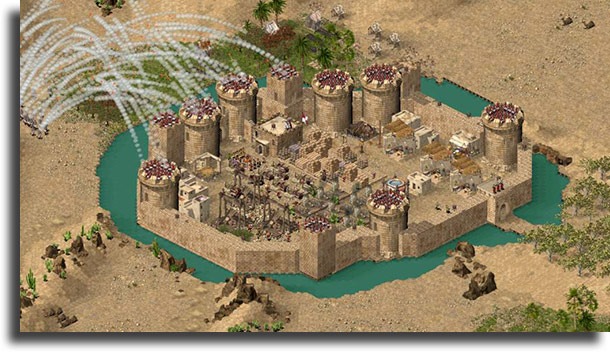 Among the best strategy games on PC, The Banner Saga is considered by many the one with the best storyline. Following a story inspired by Norse mythology, you must guide a group of survivors through inhospitable regions, while trying to escape an unknown threat.

Its combat system, although similar to that of XCOM, differs greatly in mechanics. The combat strength of your team is directly linked to how much health a character has. That is, the more hits they receive, the weaker they are, forcing the player to preserve them as much as possible.

Outside of the clashes, the game will force you to make several moral choices – many of them with consequences at all points, and may even mean the death of a beloved character.

Again another immortal classic among PC strategy games. Taking place in a rich universe of medieval fantasy, the title has a huge amount of challenging campaigns, being able to easily play for hours on end. Heroes of Might and Magic III mixes strategy games with RPG, allowing you to command skilled heroes and improve your fighting forces through combat and training.

Despite already having an edition in HD, it does not bring the expansions of the original game, so you might prefer to sacrifice the current graphics in order to be able to take advantage of all the content that had been made available with time. Heroes of Might and Magic III was originally released in 1999.

Other games similar to Heroes of Might and Magic III: Age of Wonders, King’s Bounty: The Legend, Disciples II. 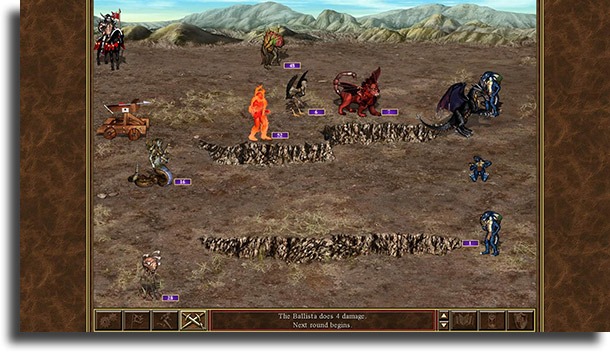 Perhaps the most controversial among strategy games for PC. Instead of commanding troops or kingdoms in search of glory, you must command a sports team, which plays a bloody variant of American football. But it is not just ordinary humans who compete in the sport: vampires, demons, ogres are some of the races that can be part of your team… or your rival’s!

Although American football is a dynamic sport, the action here takes place all in turns, with disputes resolved by rolling the dice. After all, Blood Bowl is inspired directly by a board game of the same name. 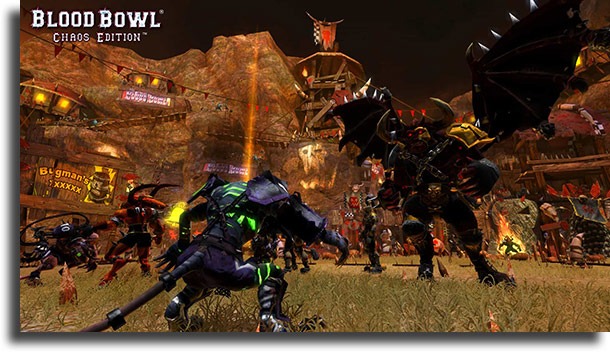 Another title that we also did not find a similar title for comparison, you should no sleep on this hidden gem, which is one of the best strategy games on PC (and one of the best lightweight PC games!). Developed by a Brazilian studio called Behold Studios, Chroma Squad can be described as a “studio simulator for super sentai series”.

For those unfamiliar with the term, super sentai are Japanese series that usually have a team of five colorful heroes, who fight against monsters and forces of evil. If you’ve watched shows like Changeman and Power Rangers, that’s what we’re talking about.

During the game, you will have to decide how you will deal with fans, choose what equipment you will use in the episodes, and, as it could not be missing, participate in the action scenes.

Despite being a serial studio, the battles must be conducted as if they were real, moving your rangers in a tactical turn-based combat scheme, as in XCOM 2 or The Banner Saga. But in colorful tights and lots of acrobatics.

There are no games similar to Chroma Squad, but we are anxious for more!

While Chroma Squad is a fun, crazy studio simulator, Crusader Kings II can be considered a “medieval nobility simulator”. Choosing a feudal lord from the medieval era – both small counts and kings who were part of history – you must navigate through the game of thrones of the nobles, building relationships, planning murders, and making sure that your lineage is not extinguished.

The title already has a large number of expansions, which allow you to enter the shoes of Arab sultans, Eastern leaders, or even Maharajas of India. However, it is a game that requires more patience and planning than action itself, not suitable for those who like to lead troops in combat. 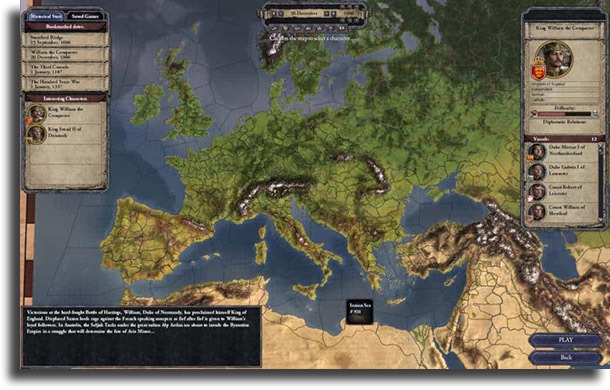 A relatively unknown game, developed by an independent studio in Canada, Epic Manager mixes mechanics of sports simulators like Football Manager in a fantastic world inspired by RPGs.

Although its combat mechanics are similar to the genre, the main thing about the game is to coordinate your agency, hiring adventurers – and managing their contracts! -, increasing your influence and gaining reputation among the main factions of the kingdom.

Possibly the simplest among all the best strategy games on the PC. Forget the command of troops, complex kingdoms, and breadth of options. In Reigns, you will be a king who must always choose between two choices, presented as cards.

Each decision will increase or decrease the strength of any of the factions in your kingdom: church, people, commerce, and army. However, if any of these factions becomes too strong or weak, your king will be deposed, continuing the game as your heir.

There is, unfortunately, no game similar to Reigns.

Which PC strategy games have you played the most in your life?

Between Civilization, Warcraft and XCOM, my Steam account registered the XCOM franchise as the most played and it’s hard to hide my preference for it and for the genre of squad-based strategy in general. But what about you, which strategy franchise plays the most on the computer? Are you a fan of RTS? Comment below and tell us about your favorites!