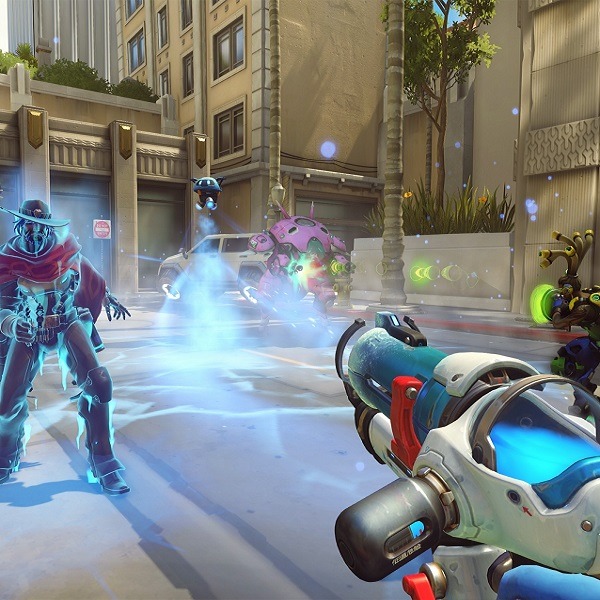 
As much fun as single-player games are, we know that online PC games can bring an even more interesting experience. With them, you can play with both your friends and strangers around the world. The only problem is choosing which of the best online PC games to play, after all, many require time and investment from the players.


To help you out, we’ve picked some of the best online PC games you can find today. They are games of the most varied styles, with both cooperative and competitive options. Check them out down below!

Overwatch is still one of the best online PC games you can try today. Even after 4 years of its launch, the game continues to get new characters, maps, skins, and events, all for free.  As a result, its player base remains very large and it is easy to find matches in any of its modes.

For those unfamiliar, Overwatch is a first-person shooter that has very different mechanics for each of its characters. You can hop onto Quick Play, Competitive, or even in Arcade mode for more relaxed games. So, you can enjoy a little of everything without much pressure.

The cool thing is that they offer a complete game replay system. This is great for those who like to record games and take screenshots, for example. If you’re curious, you can learn more on the game’s official website. 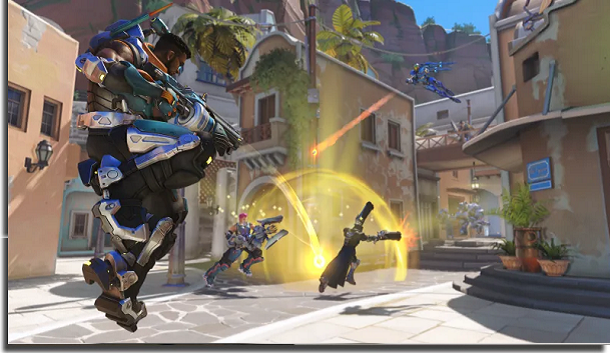 Another excellent game, one that inspired the Overwatch development team a lot, is Team Fortress 2. It is recognized as one of the best shooters of its style and still one of the most fun options among the best online games for PC.

The good thing is that it is currently free and has only cosmetic items for sale, its graphics aged very well and the game still receives some updates to this day. You can find out more on this link.

Paladin is a very fun first-person shooter that has some diversified mechanics for those who don’t want a simple shooter. It is usually called the free Overwatch alternative, although the two games have become quite different over the past few months.

In any case, it is worth mentioning that the game is very lightweight, has very beautiful graphics, and is easy to learn in general. You can check out more about it by following this link.

If we’re talking about online PC games, we also have to mention Fortnite Battle Royale, which easily is one of the best, as you might already know since this is one of the biggest games in the world today.

That happens not only because of the popularity of games in the Battle Royale genre but because it is completely free and has a lot of content being added frequently. You can play with your friends or strangers in several ways, choosing whether to face everyone alone or in groups. Learn more by following this link.

PlayerUnknown’s Battlegrounds – or PUBG for short – came before Fornite Battle Royale and was largely responsible for popularizing the genre. Even though it is a paid game, it was one of the most played games in the world for a long time.

Among so many trading card games, Magic The Gathering remains a favorite. The game has inspired several others over the years and finally won the modern digital version that its fans wanted.

Magic Arena has most of the popular modes, and you can build your decks and play against friends or other players around the world. The game is free and can be downloaded by following this link. 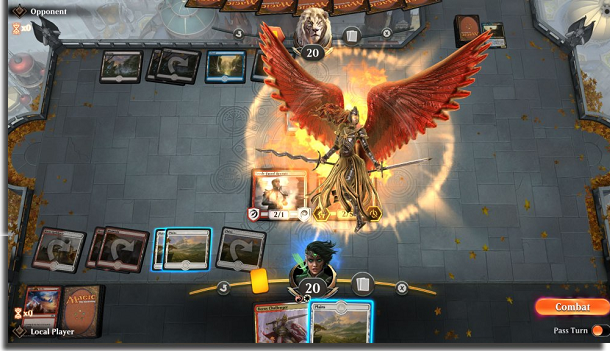 Another option for those who like card games is Hearthstone. The Blizzard game is one of many inspired by Magic, but it has its own unique mechanics. The game has a few different modes and can be played against your friends or other players in the world.

It is free to play but offers digital card packs that can be purchased if you want to speed things up a bit. As it is a lighter game, it is very good to enjoy on simpler PCs. After all, it does not require much and does not increase the temperature of the PC. Learn more on the link to download the game.

Rocket League can be a little difficult to explain if you’ve never seen it before. It is like a soccer game, but with rocket-propelled cars instead of normal human players.

Strange as it may seem, it is one of the most fun online PC games out there today. Like most multiplayers, you can play it with random people or your friends. You can check out more by following this link.

It is very likely that you have at least heard about League of Legends. This is one of the most played options among the best online PC games in the world, and one that attracts eSports fans as well.

Essentially, it is a MOBA and features dozens of characters with unique abilities, each with dozens of different skins. The game is free and can be played with your friends even on the simplest PCs. To learn more, just check out the game’s official website.

Another good option for those who like MOBAs is DOTA 2. Although the franchise is older, the game itself is newer than League of Legends and more complicated to learn to play, but it is really good, and it can be much more fun.

Even after a few years, the game continues to receive several updates that make it more balanced and dynamic, receiving new characters constantly. It’s worth checking it out, something you can do by following this link.

Another excellent game that could not be left out of the list is Minecraft. Not only is it a great online game, but it is also one of the biggest hits in the world and one of the best-selling games in history.

It can be played entirely solo, but it is even more fun in its online mode. You can play with your friends on your own server or join existing servers with their own adventures. Check out more at on the official website.

Since we’re talking about Minecraft, we can’t forget about Terraria. The two games are very similar, but Terraria is all in 2D and has some slightly different elements.

Like Minecraft, the game works very well if you want to play alone, but it shines in its multiplayer mode. You can learn more about it on Steam!

It is well known for being one of the best shooters ever made, so it’s worth checking out. Currently, the game can be downloaded and played for free, so there’s no reason not to try it out. Go to Steam to learn more about it.

Payday 2 is a game with quite an interesting premise, as it puts you in the role of a robber who needs to plan and execute huge and complex heists. It even has a solo mode, but of course, it’s the multiplayer mode that makes the game shine.

Performing these robberies perfectly with a group of friends makes it a lot more fun and requires more coordination from everyone. Really, one of the best online games for PC. You can check it out here.

Don’t Starve puts you on a randomly generated island and your goal is to try to survive any way you can. For that, it is necessary to collect resources, hunt, make clothes, shelter, crops, traps, tools, and much more.

Other than that, you need to protect yourself against the elements and the different seasons. With the Don’t Starve Together expansion, you can do it all with a friend by your side. Follow the link to find out more about the game. 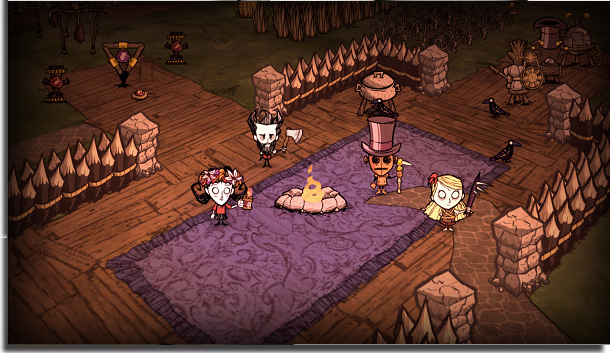 Viscera Cleanup Detail is really kind of different from the other online PC games on our list. It just makes it even more fun, especially for those who like non-conventional games.

In it, you work as a space caretaker who needs to clean up the mess space soldiers are making after great battles. Basically, you need to clean up a lot of blood and body parts from aliens. It can be played solo, but it is much cooler if you are playing with friends in its online mode. The game can be found on this link.

The Elder Scrolls is one of the most well-known role-playing franchises in the world. If you are one of the millions of pre-existing fans or want to know a new franchise of this genre, the official MMO can be an excellent choice.

The experience is completely online, but you can play and go on your adventures by yourself if you want. This is great for those who like to vary their gameplay in this type of game.

For those who like online PC games to do group activities, it is worth knowing that there are many dungeons for 4 or 12 players. In other words, the content doesn’t lack diversity. You can learn more by following this link.

Another good option for those who like the Elder Scrolls universe is Elder Scrolls Legends. It is another great card game, but with far fewer pay-to-win elements than Hearthstone.

It has a really cool story mode that teaches you how to play and still guarantees you some really cool bonuses. Other than that, the card shop always has promotions or even offers of free packages for players who play it frequently. Check it out here to download it for free.

Star Wars: The Old Republic is also an MMO, only more focused on those who are fans of George Lucas’ saga of films. In it, you choose your character’s class and whether they are more inclined to the Light or the Dark Side of The Force.

Depending on the combination you choose, you can follow a different story. This makes it worthwhile to experiment with other characters to experience even more plots and playstyles.

It can be played for free, but it also has a monthly subscription for anyone who wants to unlock all its benefits. If you want, you can follow this link to download it.

Finishing off our list, Neverwinter is another free MMORPG that you can enjoy at will, especially if you are a fan of Dungeons & Dragons. The cool thing is that it has several features that can only be found in paid games, but for free.

The game has many of the known D&D mechanics, classes, creatures, and places, but you can enjoy everything without having played the tabletop RPG before. There is a subscription for those who want more benefits, but it is not necessary. You can check out more on the game’s official website.

Did you like any of the best online PC games?

So, did this list help you to find out any previously unknown games to play online on PC? Let us know in the comments, and be sure to check out our suggestions about the best simulation games for PC!

Also, make sure to tell us if there are other titles for those who like to play or create games that you would like to have seen on our list.