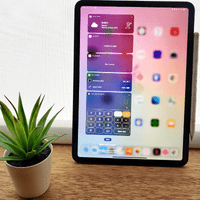 
Annually, Apple releases an update for iPhones and iPads followed by several smaller updates throughout the year. Between 2020 and 2021, several features came to improve the iPad experience and brought a lot of news with iPadOS 14 and iPadOS 15.


Powerful features designed to improve your productivity, including tools that help you stay focused, for example.

In addition, features for sharing streaming content and interacting via video calls with family and friends are also part of this package. 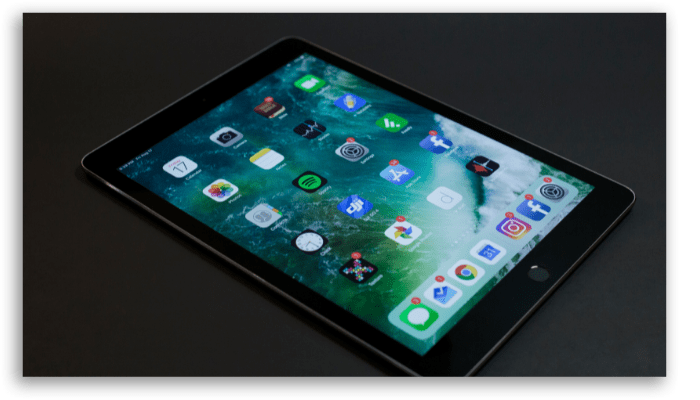 iPadOS had its first version developed in 2019, along with iOS 13, including specific features for the most modern devices. The iPadOS 14 update brought better search performance and the Safari browser, as well as the ability to find and access apps, contacts, and files through the search bar.

With iPadOS 15 came more efficient multitasking, versions of widgets on the home screen aimed at the iPad, in addition to new ways to take your notes, and all the versatility that the tablet can provide to its users.

In today’s article, we will detail some of these news.

The most significant change since iPadOS was developed concerns Multitasking. With the power of a large screen, it is possible to take advantage of this feature of accessing some apps simultaneously in a much more practical way.

With a new layout that lets you access apps from the Home screen more quickly, the multitasking menu lets you tap on the top of the screen, or open a window in the middle of the screen, to choose between the feature options – Split View, Slider Over, and others – making it easier to manage open applications.

See some of the features:

One of the apps that has been modified over the last few updates is Files.

Improving the file management experience, with the addition of some features coming from macOS Finder to the app in iPadOS 15, you can now group folders and files, as well as drag and drop them.

There’s also a file selection tool with trackpad or mouse, and for some iPad models that support USB-C, a file transfer progress indicator and read-only support for NTFS has been added.

One of the most powerful features that, perhaps, carries the great news of the iPadOS 15 update concerns the improvements that have made the Apple Pencil even smarter.

Now, with any pen tip, you can convert your handwritten text to typed text. It is also possible to select the text and, by crossing it out with the pen, erase it. 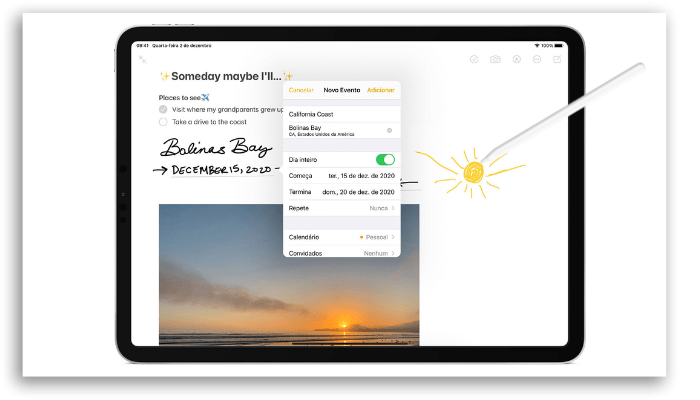 In addition, detectors recognize shapes, phone numbers, dates, addresses, and URLs. At first, the feature called Scribble will support both English and Chinese (traditional and simplified).

Widgets already existed at Apple, but have recently gained prominence on both iPads and iPhones. Developers can now create different sizes – huge, large, medium, and small – to appear on the home screen.

All of this will help you customize your Home Screen pages, just like on the iPhone, placing your widgets anywhere on your home screen. 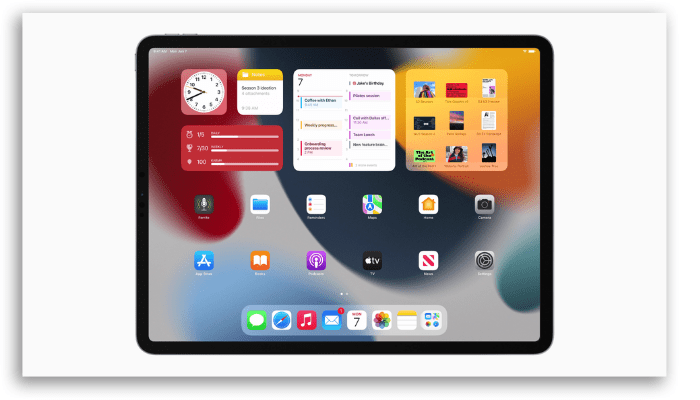 And to improve your experience even more, iPadOS 15 introduces a new App Library format where your apps are better organized into categories predefined by Apple. However, you can access it by dragging the screen from right to left or directly from the Dock.

All the support to mouse, keyboard, and Apple Pencil, which are vastly superior, differentiate the iPadOS experience from the iOS experience.

One of Sidecar’s main features, which is the way to use your iPad as a second display, allows you to interact with macOS through the Apple Pencil.

An extremely useful feature for those who use Apple ecosystem settings for their creative work.

One of Apple’s main features is the integration between its devices, transforming the experiences between users. With the new Universal Control feature, you can control Mac and iPad using a keyboard and mouse or trackpad.

The connection between the devices will be Wi-Fi Direct, and once they’re connected, you can swipe the Mac cursor on the iPad, or type words on the keyboard on the computer to the tablet.

However, for Universal Control to work, you need to update your Mac to macOS Monterrey.

Another way to use your Apple Pencil with a new update is within the Notes app. With the Quick Note feature, you will be able to access the app while using other apps, using the pen, or even typing and saving information.

To access the app, regardless of what is open on your screen, you can use the keyboard shortcuts, the Control Center, or slide your fingers (or your Apple Pencil) into one of the corners.

All your Quick Notes can be viewed in a special menu and you can organize them with tags or keywords.

And if you’re working as a team, share a note with others and view the changes in the Activities menu. If you want to highlight someone, add the person’s name to get their attention.

In iPadOS 14, Safari already had a privacy report so that users could monitor passwords and check trackers of blocked websites.

But with iPad OS 15, Safari appears with a new design, more minimalist and with highlights for the visual experience of users. The tabs follow the color of the site visited, and the Groups of tabs allow you to switch between the open sites.

There is also Voice Search built into this feature.

If you are a programmer or want to enter this area of ​​application creation, this news is for you!

Apple has made the SwiftUI language available on the iPad, and just like on the Mac, you’ll be able to see the results of your code in real-time.

It will be possible to create apps and even publish them on the App Store using the guide for beginners. 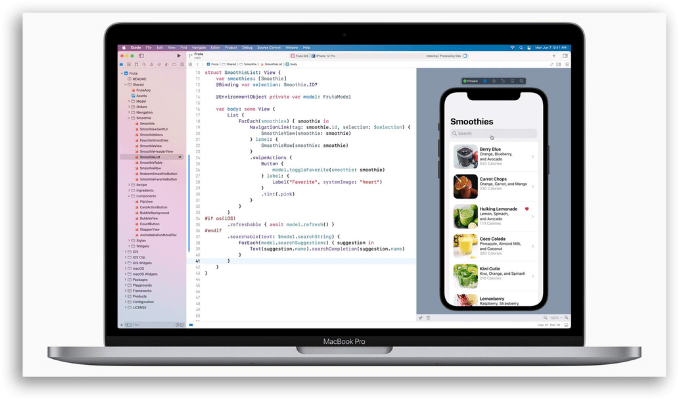 Other iPadOS 14 and iPadOS 15 news

Finally, we mention some other news that are already present in iPadOS 14 and 15.

Finally, check the list of iPad models compatible with the iPadOS 15 operating system version by clicking on this link.

Perform a complete backup of your device and get ready to receive the new operating system!