The 6 best speech-to-text apps for Android and iPhone!


Even though we, writers, tend to prefer typing out our messages, notes, and obviously the articles and guides you can find here on AppTuts, this might not hold true for you. For instance, you might be one of the people who really like using your voice, sending audios, instead of typing stuff out, which can be annoying for some.


In this article, we have decided to help you out in fixing this annoyance, suggesting some of the best speech-to-text apps around. Keep in mind, many of the native keyboards also offer this feature!

The first app in our list is exclusive for iOS devices. Turning audio into text is not actually its main feature, since it is primarily one of the best iPhone call recording apps.

However, it also lets its users use the app to dictate notes and texts, and then share what you’ve written (or transcribed) via email, or even share it to social media platforms. If you want to use this app, go to the App Store to download it! 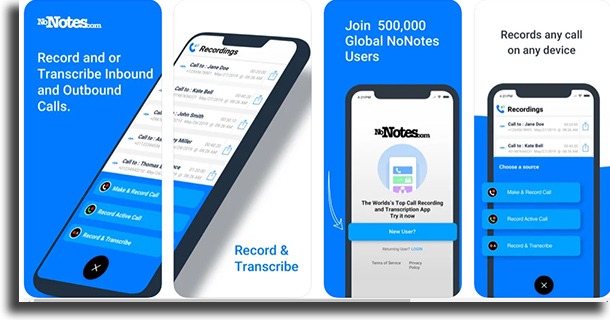 Evernote is one of the best calendar apps around, and it is one of the most comprehensive productivity apps around. One of its many features is one that lets you use your voice to create reminders, task lists, texts, and any other sort of material that you need transcribed from voice into text.

Evernote is one of the best speech-to-text apps, and it can be used on computers as well as mobile devices, whether they are Android or iOS. Follow this link to reach the website, where you can download it for any of your devices!

Another app that’s exclusive for iOS users is Voice Recorder+, one that lets you edit any conversations you might have recorded, and it also lets you transcribe them into text.

Voice Recorder+ is able of understanding over 400 languages, and it offers tools for ambient noise reduction, as well as sharing via email, messaging apps, and social media platforms. As you might have noticed, it certainly is one of the best speech-to-text apps, which can be downloaded on the App Store!

Dragon Anywhere lets you convert from audio to text, it makes it much easier to create documents of any length, it lets you edit everything you create, and it even lets you share directly from your mobile device. The app also works on your computer, whether it is Windows or a Mac.

You can dictate and transcribe texts without any sort of word limit, and it claims to be the most precise option in the market. Dragon Anywhere lets you create messages five times quicker than by using the regular keyboard, works with several languages, and it lets you create customized words. To learn more, follow this link.

TalkBox Voice Messenger works quite differently than Dragon Anywhere, as in, it is much more geared towards texting while using your voice. Even though it only works with your voice, you can make the chats appear in text for you.

Other similar features are also found in this app, including integration with social media platforms and the creation of chat groups. It is a great option among the speech-to-text apps. TalkBox Voice Messenger can be downloaded on the Play Store and on the App Store.

With a very simple interface, all you need to do to start creating your message using your voice is to tap a microphone-shaped icon. Speechnotes is one of the few speech-to-text apps that features Bluetooth connection, and as such, it is not as reliant on internet connections.

This Android exclusive app offers a feature that also lets you add punctuation via voice commands or via an exclusive punctuation app, making your dictated messages much more cohesive than most other apps, among other features. Follow this link to learn more about it. 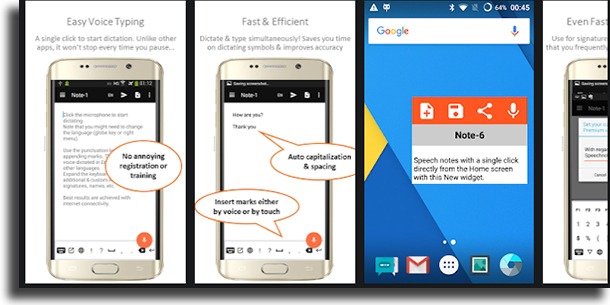 Of course, there might come an occasion where you need to do the opposite of using one of these speech-to-text apps. That is, use a text-to-speech app. Luckily, there are some amazing apps in this category that we can recommend you use. Check out some of the best text-to-speech apps down below:

Which one is your favorite of the speech-to-text apps?

Now that you know some of the best apps with this feature,leave a comment saying which one is your favorite! Don’t forget to also check out the best video editing apps for iPhone and the best free Android apps!