The 12 best apps to measure distance


Every smartphone today has several sensors that can monitor your running speed, distance traveled and calories burned. And many of these apps to measure the traveled distance can be paired with smartwatches or devices like Fitbit, making the situation even better.


If you are interested in starting to exercise, whether through running, walking, or cycling, it can be very useful to download one of the apps. Keep reading our list to see all about them and start losing weight right now!

Our list of apps to measure distance starts with Strava, one of the most famous apps used by cyclists. It can also be used for those who want to run, walk, or simply see how many meters or kilometers they have walked.

You can see a lot of important information about your exercise. Pace, speed, and progress are some of this information. In addition, it features an interactive map that shows data such as route, distance, and elevation gain. If the user has a heart rate monitor, it is possible to sync the app with it, to monitor that too.

Users can join an exclusive club where all participants share information and get the latest news about any physical activity.

It shows a ranking of everyone who passed through the same region as you, giving a good air of competitiveness. The app allows you to share your progress on any social network. Strava is available for download for both Android and iOS.

This is a set of different apps to measure distance, having MapMyRun for runners, MapMyWalk for those who want to walk, MapMyRide for cyclists, and MapMyFitness for the most diverse types of physical exercises.

All but MapMyFitness offer very similar functionality, such as the ability to track how long you’ve been moving, your pace and speed, as well as checking elevation gains and losses and the average calories burned.

They also allow you to upload data relating to the races, to be accessed through the website in any browser or the app on other smartphones. It lets users share their favorite routes with friends.

Finally, you can also sync the app with various devices that monitor your physical condition, such as Fitbit or MyFitnessPal, in addition to all Android or Apple smartwatches.

On MapMyFitness, you can also see how far you’ve covered, but also exercise in a selection of over 600 different ones, choosing pre-set routines or creating your own.

In all, you can share progress, routes, and everything you are doing in them on social media such as Instagram. Download via Play Store or App Store.

Runtastic is the first of the apps to measure distance on our list that is developed by one of the biggest sports equipment companies, Adidas.

It has numerous features, monitoring your activities, measuring how much you ran, how long you did it, what the user’s speed was, and even what altitude, with gains and losses, the exercise was performed.

It still makes a prediction of how many calories you burn and has a history of all the workouts performed, distributed in tables and graphs. It also has several audio training programs, with guidance and motivational messages.

The app has a large active community of users, with whom you can exchange information, in addition to having a ranking so that you can compete friendly with other users.

It is compatible with Android and Apple smartwatches, Google Fit and Garmin to further improve your health monitoring. Download for Android or iOS. 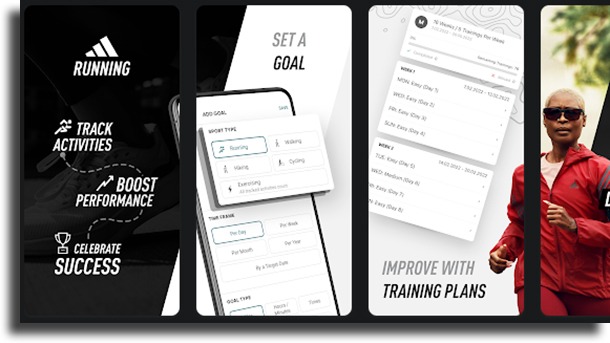 Continuing with the apps developed by major brands, we have Runkeeper by Asics, probably the best-known running shoe company.

It uses your smartphone’s GPS to monitor your running, cycling, climbing, and various other activities of the kind. It monitors the steps you take, the distance covered, the total exercise time, and the number of calories burned, among other interesting information, in addition to offering several training plans.

You can measure your progress and view your exercise history, as well as sync this app with several others to get more detailed information about the activity in question. Works with a wide variety of smartwatches and training devices such as Apple Watch and Android Wear.

You can also set up your own workouts and compete with friends via Facebook. It allows you to share your exercise data on the most varied social media, such as Instagram, as well as allowing people to follow your exercise live. Download for Android or iOS.

Another one of the biggest and most famous brands of exercise equipment is Pumatrac which, as the name implies, is developed by Puma. It has a very simple and attractive interface, with all the necessary basic functionality, in addition to extra tools to improve usability.

This is one of the few distance measuring apps that offer a lot of extremely useful information. It tells you what the weather is like, total running time, what your pace is, how many calories you’ve burned, and what altitude you’re at, among others.

It also tells you, from your history, which time of day is best for you to exercise and which music genre makes you run faster. In it, you still find a history of your exercises, to measure your progress. Download via the App Store or Play Store. 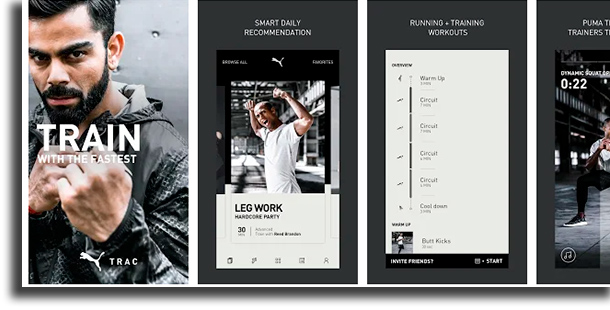 If you’re into the fitness world, you’re probably familiar with Fitbit, one of the best fitness and health monitoring devices, complete with heart rate and calories burned.

What many don’t know, is that the same company has an app so you can exercise, which doesn’t require the use of the device. It has several different monitoring, such as distance traveled, calorie burn prediction, and more.

In it, you will find graphs showing your progress and how much you have improved, monitoring of steps taken, and even the average time you exercise. You can also see a map with all the routes you’ve taken.

It is also possible to carry out virtual competitions against friends and other users of the application, such as races and various challenges. It is available for download from the Play Store and the App Store. 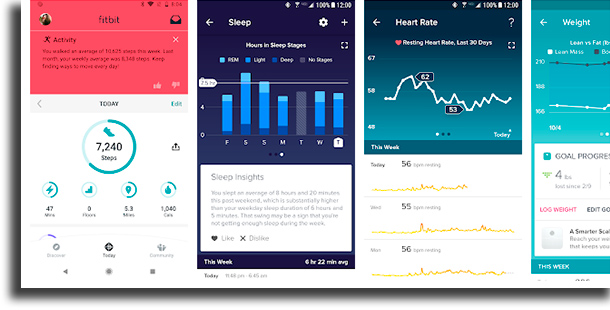 Another one of the best apps to measure distance, developed by the company that is possibly the most famous of accessories for physical exercises, is the Nike Run Club. It has several features, such as route, duration, and speed monitoring.

It can also automatically pause data collection when the user stops moving. It has several daily challenges for you to overcome yourself, and compare yourself with friends, and it offers tips for beginners and for those who are already more advanced.

You have access to a record of all your physical activities performed using the app, for better control, in addition to having personalized training, offered by Nike’s own coaches and athletes. Download for Android or iOS.

Couch to 5K is a perfect app for beginners who want to get into the running hobby to get in shape, improve their breathing and lose their belly. Its proposal is to make almost anyone get off the couch and run 5 kilometers straight in just 9 weeks of use.

It has several pre-set training schedules, lasting 20 to 30 minutes three times a week until you’re ready to race. It gives you information on when to run and when to walk, as well as shows you the best route while increasing your stamina and strength.

It has four different virtual instructors, so you’re always motivated. It also tracks your time and distance traveled via GPS, so you can better see your progress. It is available for both Android and iOS. 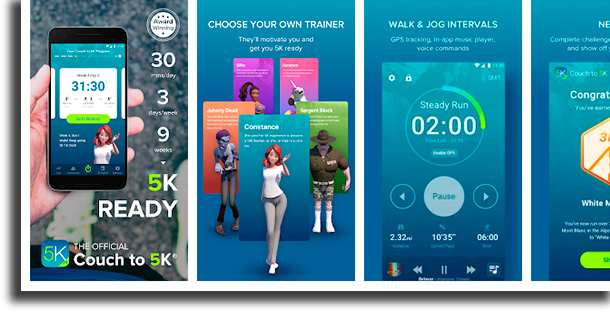 Walkmeter is another of the best apps to measure distance, with features like speed, time, and distance monitoring, as well as a virtual instructor to motivate and help you.

In the app, you can view your past walks and runs through a calendar, viewing them day by day, or viewing by routes, to see all performed on that route. It has integration with Google Maps, so you can see terrain and elevations through the app.

It also has voice and audio integration with social media, so you can always stay in touch with your friends. In it, you can also find training plans for 5 kilometers, 10 kilometers, half marathon, and marathon, in addition to being able to create your own.

You can also race against yourself or your friends, to give an air of friendly competitiveness and resilience. Download for Android or iOS.

The Zombies, Run! is one of the most fun apps to measure distance, which works by simulating a zombie apocalypse, in which you have to escape from the monsters that are chasing you. The more you run, the more supplies you gain to help your village survive. If you run too slow, they’ll catch you.

It’s a very interactive and different way of motivating users to run. It has more than 300 different stories, through subscription, in addition to several free ones, being able to unlock one each week without paying anything.

It works at any speed you want, you can walk, run slowly or go really fast. You can create your own music playlists to motivate you even more and, if you want, you can activate the chase mode, where zombies will be after you. Download for Android or iOS. 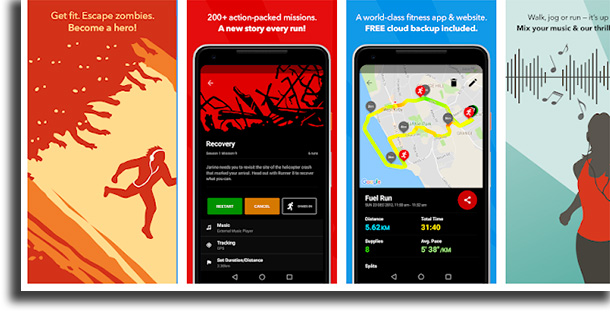 The last of the apps to measure distance on our list is Charity Miles, which has a very interesting premise: for every 1 mile you travel, you donate 0.25 cents to a charity of your choice.

It is quite simple, offering only the monitoring of your locomotion, with distance traveled and how long it took. It gives prizes to users; The more money you raise, the more chances to win.

If you are in need of some extra money, you can also create a page for yourself and share it with your friends, so that the money that would go to charity will go to you. It is available to download for both Android and iOS. 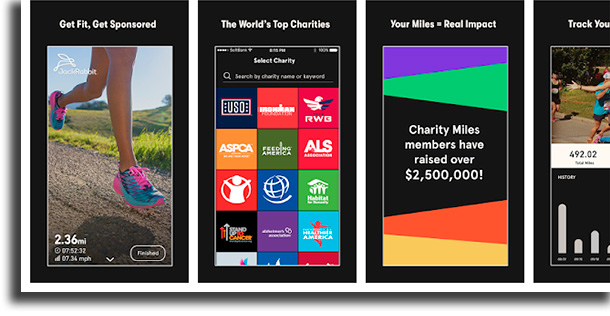