Skip to content
Tutorial Social Links
CoTweet: Everything you need to know

CoTweet: Everything you need to know


That is, the feature allows you to compose a tweet and add a co-author to it so that it can be shared with the followers of both accounts.

Twitter said that only “selected accounts” in the US, Korea, and Canada will be able to “send invitations to CoTweet”.

And sending those invites is basically how you create one. We will go into more detail on this later on.

Twitter also mentioned in their help guide that the test was a “limited time trial” and that they “may disable this feature and any CoTweets that were created may be removed.”

How to identify a CoTweet?

The new feature is basically a single tweet that has two authors. Essentially, the tweet header has two usernames and two profile pictures.

So a good example is this post on Sally Darr’s profile. You can click the link to open the full CoTweet in another tab and see what the new feature header looks like.

How to make a CoTweet? 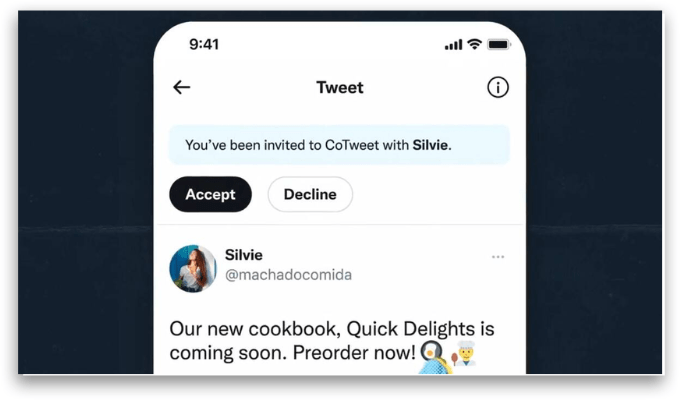 According to Twitter’s help guide on the subject, you should write your tweet as usual and select the CoTweet icon.

After that, choose your co-author from your followers and then select Send invite.

Invitations are essentially Direct Messages (DMs) in which potential co-authors can accept or decline the invitation. If accepted, the CoTweet is published. If declined, the invitation is deleted.

A few things to note about these invites:

How to interact with a CoTweet?

After seeing a CoTweet, it’s normal to wonder how other users will interact with it. Generally speaking, they can be retweeted or tweeted by anyone.

Other users can still reply and like your CoTweets.

What can you do with CoTweets?

You can add gifs, polls, photos, links to Twitter communities and spaces, and videos to these new tweets. If you sent the invitation that created a particular CoTweet, you can pin it to your profile.

But co-authors who have received the invitation cannot do so.

However, CoTweets can be pinned to a Twitter Space if the Space host is the one who sent the invitation that created the CoTweet.

Is it possible to remove yourself as a co-author?

Yup. If you’ve accepted a CoTweet invite and later decided you don’t want to co-author it, you have the option to unsubscribe. This option is known as “revoking the CoTweet”.

Still, the CoTweet will exist in the profile of the original author (the person who sent the invite) and in the timelines of that author’s followers.

According to Twitter’s help guide, you can revoke CoTweet by navigating to it and clicking its three-dot icon. From there, you will choose the Revoke CoTweet option.

So if you sent the invite, just delete the CoTweet (as you would a normal tweet) and it will disappear from the co-authors’ profiles and from their respective followers’ timelines.

Also, take the opportunity to see: