Did you know that you can use one of the iOS Launchers if you want an iPhone-like experience on your Android phone? Whether you are an Android or iOS user, both systems are getting more and more advanced over time. Both systems certainly have their own advantages and disadvantages.


Android and iOS are getting closer with each passing year, but they still differ greatly in terms of experience.

Android’s interface is more flexible and offers tons of customization options, while iOS is fluid but static and extremely restrictive in nature.

However, users consider many factors before switching to one of these platforms.

While Android gives you more freedom to explore and customize your device, iOS is a lot more restrictive in this part.

Anyway, we are not here to discuss the advantages and disadvantages of the operating systems, but to say that you can enjoy both interfaces on your device if you are an Android user.

Yes, with the help of some apps, you can also get this iOS flavor on your Android phone. If you are an Android user, you can undoubtedly experience the feel of both systems on your device.

We can’t make Android to iOS exactly though, but we can at least take advantage of the iOS interface directly on our Android device.

So, if you are someone who loves the iOS interface and wants to use it on your Android phone, this article will give you everything you need to know.

If you want an iPhone-like experience on your Android phone and you are looking for the best iOS Launcher, here are some useful apps that you can benefit from.

The iOS interface is very elegant, smooth, and also easy to use. However, when it comes to launchers, it can be difficult choice to choose one of the many available.

Different iOS for Android launchers come with different functionality. While some are very limited, others provide tons of features in one place.

But after some research, we created a list of the best iOS 16 launchers that provide an intuitive interface, better functionality, and a smooth experience.

Control Center 15 is without a doubt the best iOS Launcher available for Android. With over 50 million downloads and a 4.5-star rating, it offers a promising user experience.

It allows you to customize the interface, something that is not even available in the real iOS interface. The flawless iOS-like interface and its smooth transitions will never let you down.

Control Center 15 is an option to consider for the iOS experience on Android phones.

The app can provide iOS-like effects with a smooth interface and is open to customization, which is something everyone loves to interact with.

Another important piece of information is that it is also available even for the first versions of Android smartphones, being compatible even with basic phones.

In addition to the interface, you also get good security and reliability.

You can check out Control Center 15 on the Play Store.

Then we have another fantastic option, Launcher iOS 16. This launcher not only applies an iOS-like interface to your screen but also works like one.

You can simply apply the latest iOS interface design on your Android device without any hassle. One of the best things about Launcher iOS 16 is that it adapts to your screen with a notch or bezel-less display.

The app is also quite customizable, doesn’t share your data with third parties, and also provides some basic data security functions.

This is the easiest way to give your Android phone an iPhone interface. With Launcher iOS 16, you can mimic Apple’s main phone interface on any Android smartphone.

The launcher will not only put an iOS skin on top of the Android interface but make it look and work like an iPhone.

And if you have a phone with a notch or bezel-less display, you’ll love to see the notch style it adds to the top of the screen.

You can even customize the launcher to your liking and swipe up to open the control center to switch shortcuts.

In short, it’s impossible not to consider it as an option if you want an iOS-like feel on your Android phone.

Also, the fact that it has over 50 million downloads and still has a 4.6-star rating is a testament to how good it really is.

Check the iOS 16 Launcher on the Play Store.

Unlike the other two launchers, X Launcher transforms your Android interface and makes it look like iOS 13.

Although iOS 13 may seem old, it still offers a new, smooth and elegant experience for its users.

More importantly, this lightweight launcher only takes up 8MB of your phone’s storage and gives you a full iOS feel in your hands.

This particular app brings the iPhone-like control center to your Android device.

Inside the control panel, you have shortcuts like Wi-Fi, Bluetooth, Network, brightness, flight mode, and multifunctional options like turning up or down the volume or the phone’s brightness level.

It provides quick access to App Manager by swiping up like on iPhone. It has a rich theme store and customization options.

Along with the interface, it also changes the functionality and operations of your device, enhancing the user experience and giving you a more genuine iOS feel.

Check out X Launcher on the Play Store.

Launcher iPhone is the all-in-one solution if you are looking for a perfect iOS Launcher for your Android.

Launcher iPhone is one of the most stable iOS launchers to use on your Android phone. The app aims to be a clone of the iPhone interface and does so with an immense level of precision.

And that’s not all. You can even use the smart search feature by swiping down anywhere on the screen.

Once downloaded, the launcher will add the same level of iOS transition effects as well as display icon packs and system icons on your phone.

It will have app icons scattered across the home screen, just like the iPhone, but since the app has a customization option, you can easily modify it to your liking.

Even the transition effects look so real that it’s almost impossible to tell you’re using an Android device by looking at the screen.

Another advantage of Launcher is that you can categorize your phone apps. This way, it will be easy to search for a specific app depending on the type of work you will be doing on the phone.

And as it also offers customizations, we can decorate the screen the way we want. The app has over 10 million downloads and has a 4.5-star rating.

Check out Launcher iPhone on the Play Store.

Taking the vision of iOS 16 itself, iLauncher makes your Android device look more like the iPhone 14. The interface and operations are very identical.

In addition, it also makes notifications available in the Control Center like on iPhones.

However, the most exciting part is that it also takes care of some very small details, like bringing rounded corners of the screen to look similar in the front.

This launcher gives you the feel of the latest iPhone 14 with an original iOS-like interface and Apple-inspired wallpapers, which makes it one of the best iOS Launchers.

Notifications are also available in the control center, just like on the iPhone. You can access weather information, favorite contacts, and calendar in the latest iOS launcher style.

And don’t forget about the rounded screen corners to make your Android phone look like your iPhone.

iLauncher for OS 16 appears on this list because of its simplicity and ease of operation. With a simple tap, it will replace your Android phone icons with iOS icons.

Plus, Apple-inspired wallpapers add an authentic touch of iOS feel to your Android device.

However, it has limited customization options, keeping the launcher largely static. Despite this, the application is very light and fast.

This iOS clone launcher is considered to be kind to your phone’s memory resources and doesn’t take up too many CPU cycles.

This is an important aspect to consider when choosing a launcher, as this type of application is always running in the background and requires memory allocation at startup. 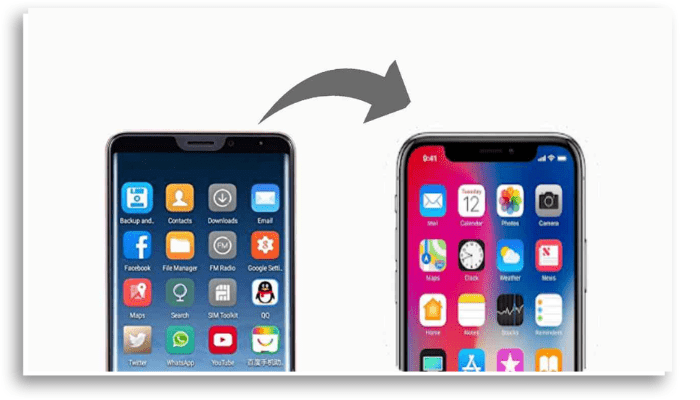 This app provides users with an iPhone-like experience with a similar interface, lock screen notifications, and convenient customization.

These are the best iOS launchers you can have on your Android smartphone.

This will give you an iPhone-like experience, which can give your phone a new lease on life.

However, it should be noted that these apps are only here to let you experience the iOS interface, they will not improve your phone’s performance in any way.

There are many factors that may not allow you to buy an iPhone. However, if you love the iOS interface, you don’t necessarily have to give it up.

These amazing iOS launchers will give you the opportunity to experience the latest iOS sensation on your own Android device.

All these launchers have something unique to offer. So if you’re not sure, you can try some or all of the lists we’ve provided.

Did you like to know about iOS launchers for Android?

Enjoy and share this article with that friend who loves iOS but wants to try Android phones.

See also: 8 apps to find out WiFi passwords on Android 7