Skip to content
Tutorial Android iPhone
Get to know what the Snapchat emojis mean! 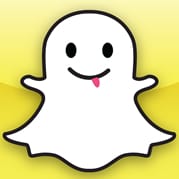 Get to know what the Snapchat emojis mean!


If you have been using Snapchat for a while, you may have noticed that some emojis are next to your added contacts and, in fact, the platform does not always explain what each of these icons indicate unless you try to change them. In case you don’t know, these emojis are not there by pure chance and actually have a special meaning based on what kind of relationship you have with each person, nice, don’t you think? If you’ve always been curious to know exactly what Snapchat emojis mean, just check out our article down below explaining them all!


Read also: 30 amazing tips of how to take a good selfie!

What do the Snapchat emojis mean?

As we said above, each emoji that appears on Snapchat has a different meaning and this varies according to the individual interaction you have with your contacts.

– The baby emoji is called “New Friend” and appears next to the name of a user you recently added on Snapchat. As you can imagine, it will probably appear frequently among your contact list in the app. More specifically whenever you add a new person.

– The fire emoji is called “Snapstreak!” and it means that you sent snaps and received them from a contact daily, for several consecutive days. If you or your friend do not send snaps to each other for 24 hours, this emoji will disappear and your streak will be restarted. You can reactivate “Snapstreak!” when sending and receiving snaps daily to the same person again.

⏳ – To help you prevent the ending of your “Snapstreak!”, Snapchat also has the hourglass emoji. It indicates that you have little time to lose the “Snapstreak!” status with the contact in question, so send and receive a snap to keep the fire emoji as we explained earlier and the hourglass will go away.

💯 – The number 100 is one of the rarest Snapchat emojis. It indicates that your “Snapstreak!” has lasted 100 days, that is, you and the contact have exchanged snaps daily for at least 100 days. That’s almost one third of a year!

– The emoji with sunglasses is the “Mutual BFs” and serves to show which of your contacts share a best friend with you on Snapchat. In this case, it can appear for several different contacts, for that to happen your best friend needs to also be the best friend of another user.

– This smiling emoji is called “Mutual Besties” and always appears next to the name of a contact who shares your number one best friend. As you can imagine, it is a little rarer than most. Mutual Besties means that both you and one of your contacts send the most snaps to the same person.

– The suspicious-looking emoji called “Your BF, but…” is shown next to the name of one of your best friends if this contact isn’t a best friend in your Snapchat account. That is, the user sends you many snaps, but you don’t return as much.

– The embarrassed emoji called “BFs” serves to represent all of your best friends, which can be several different contacts. It indicates that you send a lot of snaps to a given contact, but not enough to put you first.

– The red heart entitled “BFF” appears next to your number one best friend when you both hold this post for two consecutive weeks.

– Finally, the two-heart emoji called “Super BFF” appears when you and a contact are number one best friends for two consecutive months. It is clear that this is one of the most difficult Snapchat emojis to get.

🎂 – The birthday cake indicates that one of your contacts is having a birthday today. It essentially works as a reminder for you to wish them happy birthday!

🌟 – The gold star indicates that a Snapchat user has shared a snap posted by the contact marked with this emoji. Be sure to check it out, after all, it must be something interesting!

In addition to these emojis, when accessing your contacts’ profile you may notice an emoji with a zodiac symbol. Each of these symbols indicates the person’s sign, the caption for them would be:

Pretty easy to remember, isn’t it? If you want to check this on Snapchat itself, just go to your settings and click on “Customize Emojis”.

There, just select any option on the list to swap whatever emoji you want.

If you prefer, you can even customize these emojis by touching one of them, and you will see a fairly expansive list of options.

Of course, you can always go back to the old Snapchat emojis by selecting the “Restore default” option at the bottom of the list.

So, what do you think about Snapchat emojis?

Was it any useful to you, learning the real meaning behind Snapchat emojis? Don’t forget to leave us a comment down below telling us all about your Snapchat experience!

If you are having troubles finding people on Snapchat, click here for a quick guide on how to do it!