Skip to content
Tutorial Windows PC
The Sims 4 Realm of Magic: How it works, cheats, and codes! 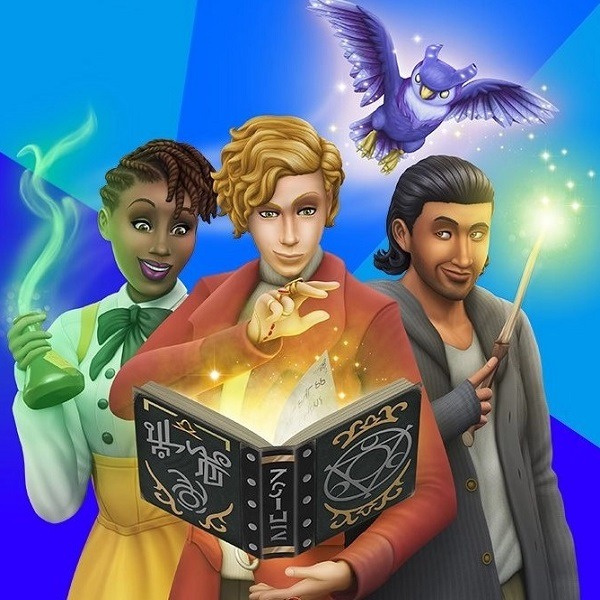 The Sims 4 Realm of Magic: How it works, cheats, and codes!


Among so many expansion packs released for The Sims, a classic and one of the most popular is always the one that involves magic. This time, we have The Sims: 4 Realms of Magic to indulge the desire to create spellcasting Sims in what is one of the best simulation games for PC today. Of course, before deciding to buy the package, it is a good idea to get a sense of what it brings and how it works.


We not only made a guide with everything about The Sims 4 Realm of Magic, but we will also talk about the main cheat codes it has. To check it all out, just take a look at the guide down below!

The Sims 4 Realm of Magic

As the name implies, The Sims 4 Realm of Magic is a package that focuses almost entirely on spells and magical interactions for your Sims. Generally, it can be found for 19.00 at its regular, but it frequently goes on sale like any other expansion pack.

Besides that, the package itself is very well optimized and should not even increase the temperature of the PC after its installation. You can either create a normal spellcaster Sim or have an existing one learn to use spells.

To make a spellcaster Sim, just open the option to “Create a Sim” and select the “spellcaster” option. In the same way that you can select for your Sim to be an alien, vampire, or an ordinary human, for example.

Becoming a spellcaster with an existing Sim is also very simple. You need to make them travel to Glimmerbook, and find the portal that takes you to the Magic Realms.

There, you will need to find one of the three wise spellcasters, who have runes above their heads. When asked to help you become a spellcaster, they will require you to find seven purple orbs across the Magic Realms.

This is very simple and when your Sim finishes the quest, they will do the Rite of Ascension to turn their Sim into a spellcaster. Now just learn to use magic and buy your accessories! 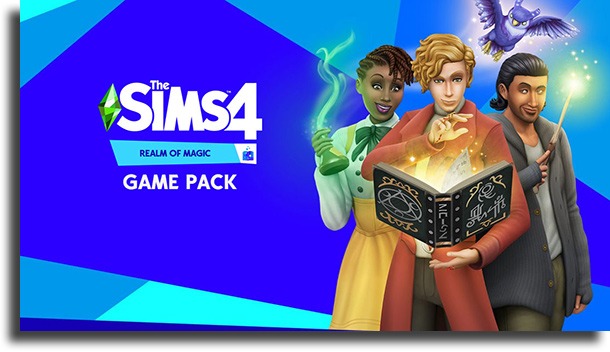 Going magic shopping in The Sims 4 Realm of Magic

With a spellcaster Sim in your hands, a new world of possibilities opens up in The Sims 4. This includes many very important accessories, items and supplies to make sure your spells will work.

In the best style of the controversial Harry Potter saga, you can find everything in Caster Alley. There, you will find three stores with different items and whose stock changes every day. They are:

“Juan’s Wonderful One-Stop Wand Warehouse”: this store offers exactly what its name promises. It is there that you can buy unique wands every day, in addition to familiars, which are pets that can protect you. The store also has several magic tomes to help you learn new spells.

“Brooms, Baubles and Beyond”: ​​also very self-explanatory, this store brings many types of brooms and crystals for Sims. As you can imagine, brooms are used to move your Sims around. Crystals are used to create potions in cauldrons.

“Questionable Quacks Emporium”: the last shop doesn’t make its purpose very explicit at the first glance. It has several recipes for most of the game’s potions, so we advise you to visit it frequently to buy everything you need.

We mentioned familiars briefly in the topic above, but this is a subject that needs further explanation. They are very powerful entities that can protect your Sims from death and/or give them other boosts.

Most games that have some aspect of magic have such a system. In The Sims 4 Realm of Magic, you can buy dragons, owls, or even stranger things at Caster Alley.

The cool thing is that you can summon your familiars at almost any time. So you don’t need to wait to be in danger to see your lovely companions!

Of course, witchcraft in The Sims 4 Realm of Magic isn’t just limited to the fact that being a spellcaster is something different and cool. There are many perks to being a spellcaster, even for those who have never cared about the magic aspects of the franchise before.

These benefits are gained from the experience your Sim gains from practicing their magic. Let’s take the best examples below!

Want to level up in the world of magic quickly? So these are the best perks you can unlock:

How about making potions faster or making them more potent? This can be guaranteed by unlocking certain perks as well:

Potions in The Sims 4 Realm of Magic

With the mention of potions, you may be wondering what kind of potions the game offers. The good news is that there are countless potions with different effects that may or may not work.

It all depends on your level as a spellcaster and your experience as an alchemist. There are potions to fill Sims’ needs, to prevent them from dying, to become friends with another Sim, etc.

You can make potions from ingredients you grow in your garden and buy from the potions store. It is best to experiment and see what happens, especially in an unpredictable game like this. 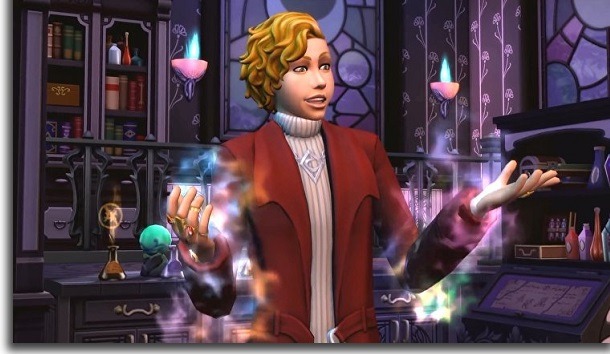 Spells in The Sims 4 Realm of Magic

There are also many different spells that your Sims can learn. It all depends on your spellcaster level and the tomes you’ve read.

Different and more advanced tomes can be found in the Caster Alley store, so it’s always good to keep an eye out there. Of course, you won’t be able to learn spells if they are at a level much higher than yours.

In general, there are three types of spells: Practical, Mischief, and Untamed. The practical ones are used for everyday things of your Sims, the mischief ones are used to play practical jokes on others, and the untamed ones are considered the most evil.

How to use cheats

Like most The Sims packs, Realms of Magic also comes with new cheat codes that you can use. They don’t offer anything much different than what you can have just playing the DLC and trying new things.

It is more like a quick way to achieve certain things. This is great especially for those who don’t want to have too much work to get all of their Sims to the highest level, for example.

This can also generate bizarre and funny moments, something perfect for those who usually record games or take screenshots. To start using the cheats, press the “Ctrl”, “Shift”, and “C” keys at the same time.

This will open the field for entering the cheat codes. Start by entering “testingcheats true” and press the Enter key so that all of the next code works correctly.

Now that the Sims 4 cheat field has opened, let’s show you some of the best codes available for this package. Just copy and paste each one and press the Enter key on the ones you want to use!

Enter the code Stats.Set_Stat RankedStatistic_WitchOccult_WitchXP # to adjust your Sim’s spellcaster level. You need to change the “#” for the number of experience your Sim will gain in the process.

There are basically six levels of witchcraft that your Sim can achieve. Each requiring a number of experience points, which is what we are going to change with this cheat code. They are:

By becoming a more powerful spellcaster, you can acquire certain special traits from this game mode. If you don’t want to have a lot of work getting each one, you can use The Sims 4 Realm of Magic cheats to have them in a matter of seconds.

It’s not just beneficial traits that spellcaster Sims can have. After all, there are also curses in Realms of Magic. If you want to make your game funnier and get the curses that interest you most, just use the cheats below.

Of course, you can repent and not want your Sims to have certain curses. Fortunately, there are also cheat codes for this:

4. Unlock potions and other hidden items

It is also possible to unlock all potions and other items hidden in the game with a cheat. Simply enter the code bb.ShowHiddenObjects to unlock everything in the Sims 4 purchase or build mode catalog.

There are two ways to learn spells with cheats. One involves using the code above to show the hidden objects to acquire and read all the tomes of magic in the game, one at a time.

If you only want to use cheat codes, you will need to use a mod called All Cheats Mod. You can find it by following this link, you just need to put it in The Sims 4 Mods folder for it to work. 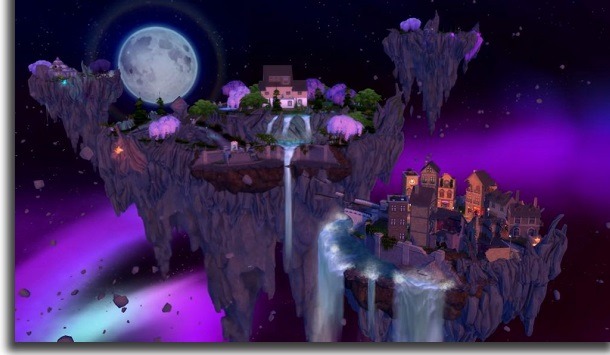 This mod is used to activate all cheats that exist in The Sims 4. Even those that have been disabled in the latest game updates. With it in your game, just use the following codes:

Did you like our tips about The Sims 4 Realm of Magic?

Did you take advantage of our tips to learn more about The Sims 4 Realm of Magic? So don’t forget to leave your comment telling us what you think of the DLC and if the codes worked for you. If you’re new to The Sims, come check out all about the Discover University expansion!

And if you’re feeling really creative with The Sims, take the time to check out our article with the best game design software!