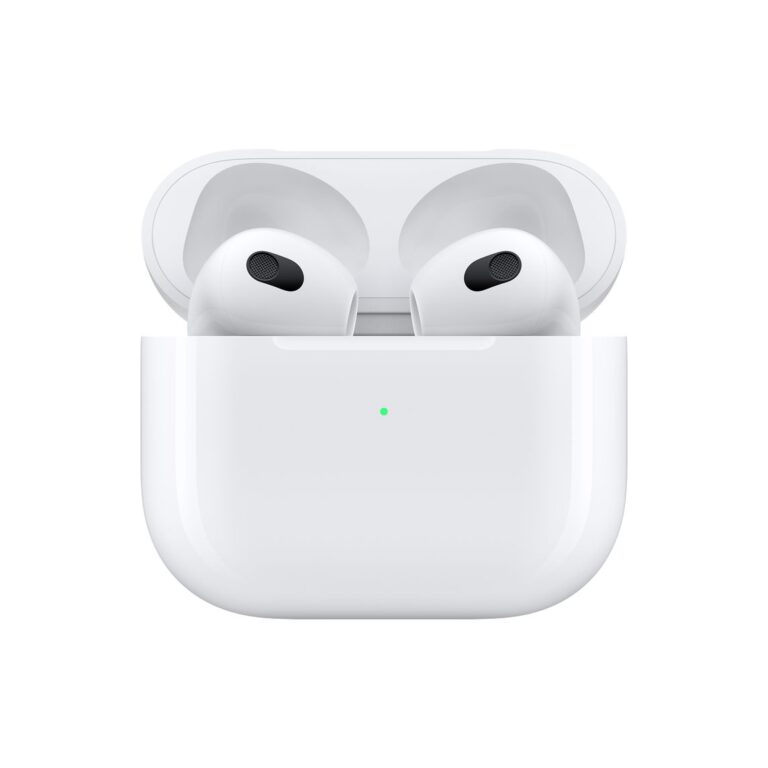 
The new AirPods 3 were announced at Apple’s latest event, along with the MacBook Pro 2021.


This third generation of AirPods came with many changes. Among them are a new design, spatial audio, longer battery life, MagSafe support and are now resistant to water and sweat.

See below some specifications:

First, we note that AirPods 3 have a very similar shape to the current AirPods Pro, being slightly rounded and with a more anatomical shape.

In addition, Apple worked for this model to have a better fit in the ears.

In previous models, a more abrupt movement was enough for the earbuds to fall and, therefore, it was more difficult to use them during physical activities.

Likewise, the shaft is smaller, similar to the Pro version and its dimensions were slightly larger.

Still, as in previous generations (other than the Pro), the earphones do not feature an in-ear fit.

First of all, Apple exceeded expectations regarding the battery life of this model, compared to previous ones.

The new AirPods 3 get up to an hour more charge than the previous generation. At the same time, it achieves six hours of audio on a single recharge.

However, it does guarantee up to four hours of battery life if you are going to use the handset for continuous conversation and up to five hours with spatial audio enabled.

Another new feature of this model is the charging case that also has a MagSafe wireless recharge. In this way, it is much simpler and safer to charge.

The amazing thing is that you can get an hour of audio by charging the headphones for five minutes in the case, with the quick recharge. Further, at its full charge, it is possible to have up to 30 hours of audio.

The new AirPods 3 feature a Lightning to USB-C cable, which is pretty standard nowadays.

Apple’s new headphones are able to reproduce impactful sounds due to the so-called adaptive equalization. This way, as the headphones are fitted to the ears, it adjusts the low and mid-range frequencies of the sound.

The new AirPods 3 are designed so that they fill the ears to convey the feeling that the audio is all around the user.

Another novelty is the spatial audio with Dolby Atmos. With it, it is possible to create a three-dimensional experience similar to what is presented in cinema. As such, you can use it to listen to Apple Music lossless!

Plus, music and video playback can be made more immersive with the AirPods 3’s dynamic head tracking. This feature is part of Apple’s computer audio system and has been introduced in previous generations.

The coolest feature is the dynamic adjustment of the sound in each headset as you turn your head from side to side, keeping the sound source anchored to the iPhone, iPad, Mac, or Apple TV you’re watching.

Another feature that Apple thought of was FaceTime group calls, where spatial audio creates a sound field that places voices where they are positioned on your device’s screen.

The AirPods 3 are protected against water and sweat with IPX4 certification.

In addition to the voice command “Hey, Siri” they also have new touch controls with the force sensor where you can play and pause songs, fast forward or rewind tracks, answer calls and activate Siri manually.

Also new is the skin detection sensor where the media being played is paused when the headphones are removed. As in the previous generation, the new model features an accelerometer with motion detection and the user’s voice.

Also highlighted is the instant connection of the new AirPods 3 with iPhone or iPad. In this sense, you only need to bring the phone closer to the device to pair and start using the features.

Although prices are already announced on the website, AirPods 3 is not yet available for purchase all around the globe.

Were you also looking forward to this release? What did you think of the news? Tell us in the comments. Don’t forget to also check out our article about iOS 15!