Skip to content
Tutorial Windows PC
Steam Deck vs Nintendo Switch: which one is the best option? 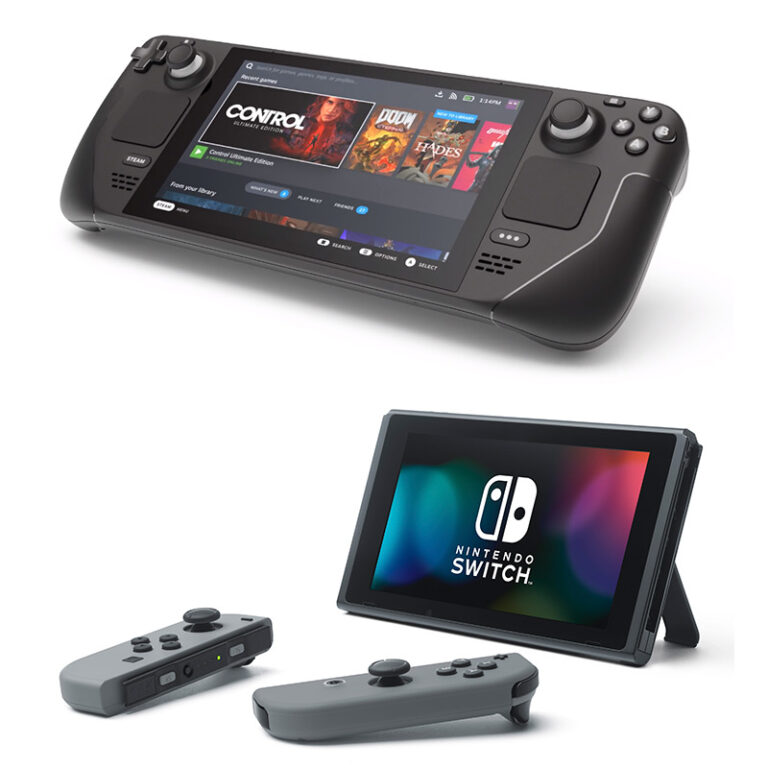 Steam Deck vs Nintendo Switch: which one is the best option?


The Steam Deck was recently announced by Valve, and with this latest inclusion in the market, the portable console market has expanded a lot. After all, by using this device, you’ll be able to play almost your entire Steam library! With that, the question arose: Steam Deck vs Nintendo Switch, which one is more worthy of your money?


Precisely for this reason, we decided to create this comparative guide between the two biggest portable consoles at the moment. If you also have this question floating around your head, just check all the sections of our article down below!

Perhaps one of the most important details when considering a purchase, without a doubt, is the specs of the device you are considering spending your money on! After all, based on them you can get an idea of whether it will really be able to perform as you want it to.

Below, you will be able to check a comparative table between these two portable devices. Check out:

With the specs of both in mind, it becomes a little easier to know which of these to buy. And it’s also pretty clear that the Steam Deck is going to be much more capable than Nintendo’s Switch. After all, Valve’s product comes with a lot more RAM than Nintendo’s, has a bigger screen, and even the most basic model has twice as much storage.

Now, opting for the intermediate or more expensive models, the memory will be considerably bigger and much faster. The Steam Deck is also capable of screening at a much higher resolution when using the dock.

Now, of course specs aren’t the only thing to consider when buying a console…

It’s very important that we make a comparison between their bodies. After all, the Steam Deck is considerably larger and heavier than the Nintendo Switch. It weighs almost 700 grams, while its rival is just 422 grams with the Joy-Cons equipped. 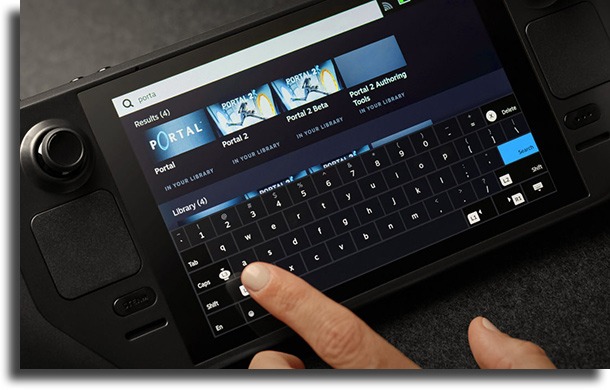 Also, with Switch, you’ll be able to remove the controls from the device’s body so that you can play from a distance, while it’s in the dock, for example.

The Steam Deck just doesn’t allow it. Controls are an integral part of the body that you cannot remove in any way. But of course, as it supports Bluetooth 5.0, you’ll be able to use a keyboard and mouse, DualShock 4 or DualSense controller, or Xbox controllers.

Still, that’s certainly a downside, as it removes the ability to play certain multiplayer games with ease and forces you to have an external way to play games if you use it in the dock.

Finally, the screens are quite similar. The Steam Deck has a slightly higher resolution of 800p, while the Nintendo Switch has a resolution of 720p.

If you are familiar with the Steam controller, the Deck’s controllers are sure to be good for you. After all, Valve used a very similar design.

The Nintendo Switch controls are very intuitive and easy to use. You can detach them from the Switch’s body, so playing is an even more comfortable experience, since you’re not stuck in a single position for extended gaming sessions.

Both Steam Deck and Nintendo Switch offer you a wide range of buttons for you to play your games and enjoy them to the fullest. 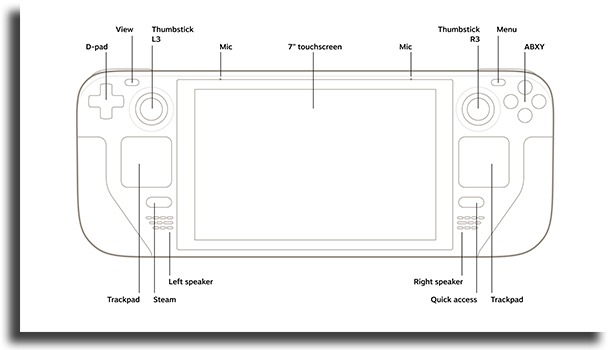 The Steam Deck has a D-pad on the left side, with an analog right next to it and the trackpad below. On the right side, you find the other analog as well as four buttons, plus a trackpad and menu button. The sides mirror each other.

It still has the traditional 4 L/R trigger buttons, and to top it off it has four extra buttons on the back of the handheld console!

In comparison, the Nintendo Switch has an analog on the top left side and four D-pad buttons. On the right, at the top are the 4 buttons, and below the other analog. It has the usual 4 L/R buttons and, if the Joy-Cons are disconnected from the device, you get four more buttons.

In other words, they are very similar, with positive and negative points for each side!

This is probably the most important part of our comparison. After all, what’s the point of having a game console if it can’t run the games you want to enjoy?

With that, the Steam Deck will be able to play pretty much any game you have in the Steam library (and it’s compatible with the Epic Games Store too!). 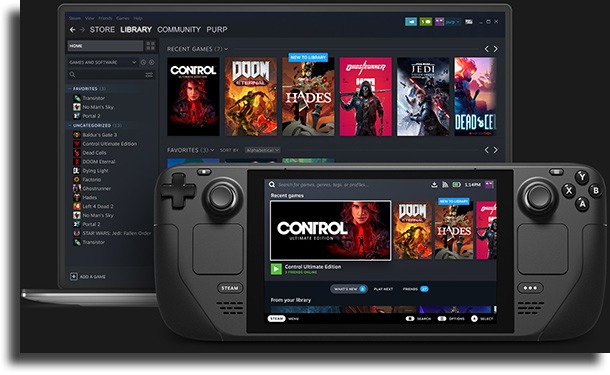 One factor that’s good to keep in mind, too, is that while the Steam Deck should run every Steam game, it still isn’t capable of it. In particular, multiplayer games like Destiny 2, Apex Legends, PUBG, and Rainbow Six Siege are not working!

This is because the anti-cheat software they use doesn’t work with Proton, the way Steam makes games work. Still, the console won’t be released until December, so Valve has plenty of time to fix the issue!

In contrast, when comparing Steam Deck vs Nintendo Switch, Nintendo’s console has a genuine (and quite important) advantage: if you like games like Super Smash Bros or Legend of Zelda: Breath of the Wild, you can only play them on that console as they are unique to the company’s platforms.

Quite simply, if what you want is a wide variety of games, Steam Deck is certainly the best option, with a vast library. Switch is only really worth it if you want to play platform exclusives.

In this area of the Steam Deck vs. Nintendo Switch comparison, the winner is clear: the Steam Deck leaves the competitor in the dust. That’s because it is, in essence, a computer.

That is, you can basically do anything you want, including accessing other game stores, internet browsers, text editors, and more.

And actually, if you don’t feel like limiting yourself using the Steam OS, you can remove it completely and install the newest Windows 11, with the Windows version of Steam! Yes! With that, you can even emulate your games from other platforms, giving you countless possibilities.

If resolution is important to you, the Steam Deck will likely be the portable of choice. Even though their screen resolution is very similar, and Switch’s is slightly better (since the screen is smaller, it has a higher pixel density).

However, the main difference comes from the fact that the Steam Deck is capable of outputting video in resolution up to 8K at 60 FPS, or up to 4K at 120 FPS! Admittedly, as powerful as the Steam Deck is, it won’t run AAA games in 4K, but using an external GPU, it’s perfectly possible.

By contrast, the Switch has a 6.2-inch screen with basically the same resolution. It’s also able to stream the game to your TV in 1080p via HDMI, or 720p if it’s in your hands and not in the dock.

The last thing we are going to talk about is pricing. You need to know how much it costs to know if it’s really going to fito into your budget or not!

For starters, the Steam Deck has three different versions, with very different prices. The cheapest is a mere 399 USD, with 64GB of relatively slow storage. It comes with a travel case.

The mid-range comes with 256GB of fast storage, costing 529 USD. This version will come with a travel case and an exclusive Steam Community profile set.

Finally, there is the version that costs 649 USD. This one comes with 512GB of storage which is even faster! Plus, it comes with a travel case, an exclusive Steam Community profile set, an anti-glare screen, and a unique virtual keyboard theme.

There is no exact release date, but it will come out in mid-December 2021. You can now pre-order it so it will ship as soon as it is released.

In Steam Deck vs Nintendo Switch, the Nintendo console is considerably cheaper. It only costs about 300 dollars for the most basic version, with 32 GB of storage.

You can also opt for the Switch OLED version, which has 64GB of storage. This one hasn’t been released yet, and the price in other parts of the world isn’t clear, but in the US it’s 349.99 USD.

It’s also worth mentioning that when you buy the Nintendo Switch, it comes with the Dock so you can connect it to your TV, for example. The Steam Deck, unfortunately, doesn’t. You will have to purchase the Dock separately, although the price has not yet been announced.

Steam Deck vs Nintendo Switch: which is the better option?

The answer is neither clear nor unique, and it really is quite personal. After all, if you want to buy a portable console that’s relatively inexpensive, cost-effectiveness points to the Switch. If you like Nintendo exclusives, the answer is the same.

But if you’re a computer gamer who has an extensive Steam library, and you want to enjoy your favorite games while on the train to work, or even lying down and relaxing, the Steam Deck is by far the ideal choice.

Also, if you want a new computer and is looking for a moderate investment, maybe buying the Steam Deck is a good idea!

Leave us a comment down below with your opinion regarding this comparison! Did we convince you to buy any?