Internet quality can often be a real torture, especially in specific locations in the country where the signal does not reach consumers as strongly as in more metropolitan areas. Very often, accessing that site that you want to check out is something that takes a few seconds, when in fact it was supposed to simply take a blink of an eye. Although this situation is frustrating, the good news is that there are some solutions to this problem. In this case, some apps can be of excellent help to increase internet speed of your Android device, for example.


Obviously these app won’t perform miracles: if your internet is slow, as it will still be slow anyway. However, it may be slightly faster than it is today. You just need to find the right app and use it when you need the speed the most. To help you, we’ve separated some applications and formed a list with the best options out there!

Just check out down below, download those that you think are interesting, and get rid of your internet speed problems! 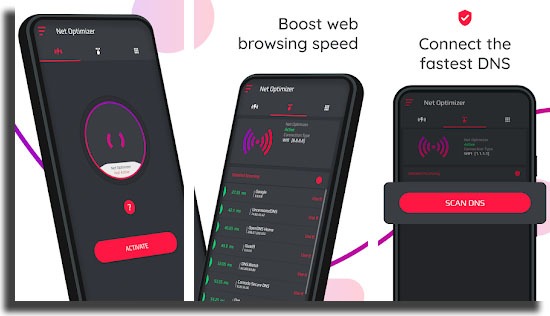 Our first recommendation is Net Optimizer, an app that works by acting directly on your DNS. Sometimes it just so happens that you do have a high-speed internet connection, but every now and then you are plagued by hiccups and massive slowdowns, then perhaps your problem lies on the DNS.

Net Optimizer finds the fastest DNS server and connects to it in a quick and easy manner. Its good reviews note ease of use and efficiency. You can download Net Optimizer right here.

A fairly simple and customizable app to increase internet speed, Network Signal Speed Booster does what it says it does. The app is light and requires very little of your device to work, so if you have an old phone, this might be a good choice.

This app basically does everything possible to stabilize your internet signal, and I mean it. Connection Stabilizer Booster will make sure your signal is at top performance at all times, and if your connection drops, it will try to keep it up and running again.

If your problems are with an unstable signal, we can’t recommend this app enough. Keeping your signal always up is key to some people, especially those that are interested in using their device as a router. You can download the app by clicking here.

Much like our first entry in this list, this Internet Optimizer Pro works by changing the DNS. Although it doesn’t fix every problem you might have, changing the DNS might fix ping and lag problems, as well as video buffering and other common problems symptomatic of poor internet connections. In some cases, resetting the DNS server is a good idea to increase internet speed.

The app will route you to a public DNS server you can use, just in case there’s a problem with your route. Download the DNS Changer by clicking right here.

An identical name to the previous entry, but we promise they don’t have much to do with each other besides the name… and the functionality. This app also works by changing your DNS server, which results in lower latency and faster web surfing experience.

Speed Booster doesn’t affect only your internet, but your device as a whole. With a focus on housekeeping, it clears your caches and eliminates junk data to keep your device’s CPU always at top performance. The app also does other keeping duties, such as keeping your CPU temperature in check.

This all has an effect on how your phone deals with your internet connection. There’s no point in paying for better internet plans thinking that it will increase internet speed if you never worry about keeping your device nice and healthy. If Speed Booster caught your attention, click here to download it. 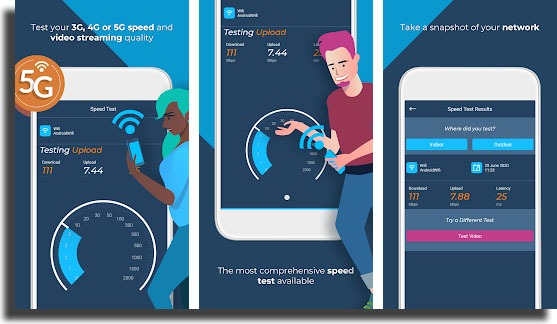 A tool not only for speedtesting, but also for testing connectivity. Opensignal sets out to increase internet speed differently than other apps: it will tell you the strongest spots for your internet connection. Alongside this functionality, you can find a bunch of tools for testing internet speed and improving your quality of life, such as finding signal towers.

The app offers a map of network coverage so you’ll know where to go in case you are looking for a clean signal. Opensignal can be downloaded through this link.

Finishing off our list with another different option. There’s only so many ways you can increase internet speed, after all. This one sets out to prepare and untangle your device to make sure it is able to handle internet connection.

The app doesn’t do anything that you can’t do manually. What it does is simplify this process. It has root and non-root changes (which you can safely revert) aimed at improving performance. Internet Optimizations might be exactly the app you need, and you can download it right here.

So, what kind of apps do you use to increase internet speed?

Nothing more infuriating than a poor internet performance, I tell you. I can attest for it, I experienced it while writing this piece! How about you? Leave us a comment down below telling us about your internet problems and what you do to fix them!