With over 103.54 million units sold as of December 2021, the Nintendo Switch has become the best-selling desktop console in Nintendo’s history.

This handheld console was also the best-selling video game in the US during December last year, surpassing the sales of Nintendo’s Nintendo Wii (101.63 million) and Sony’s PS1 (102 million units).

This information was released on February 3, 2022, by Nintendo in the company’s financial report, as shown in the image below. The brand aims to reach 23 million units sold of the Switch handheld console by the end of next March. 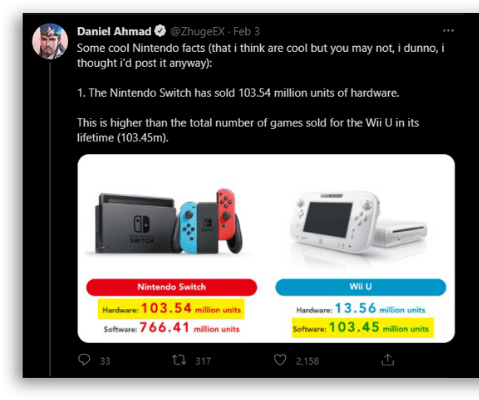 However, despite the sales success in 2021, in the first nine months of 2022, only 18.95 million Switch consoles were sold, which represents a decrease of 21.4% compared to the previous year.

According to the company, this drop can be associated with the immense popularity of the Switch after the release of Animal Crossing: New Horizons, the year before. 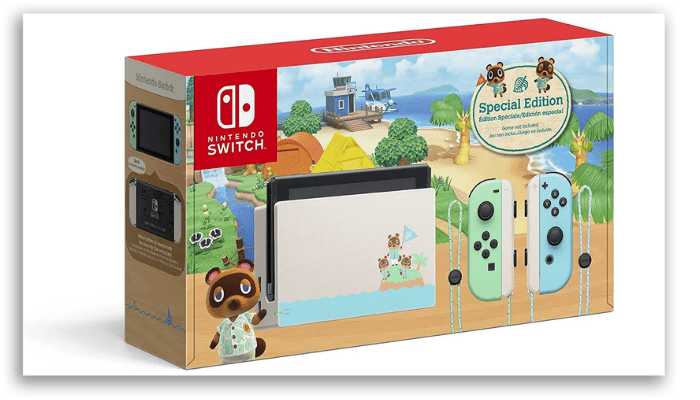 Still, it’s the best quarter of console sales for the Japanese giant!

In the ranking of sales by brand models, we find the standard Switch as the most sold with more than 11.79 million units. Following the Switch Lite, with 3.99 million (21%) and the new Switch OLED that reached 3.17 million sales (representing 16.7%).

And have you ever seen new Switch OLED console model and do you know the difference between that and the standard Switch?

We will first show you the similarities and, later, the differences between the two. If you haven’t bought yours yet, you will be able to choose which one you prefer.

Launched in 2021, the Nintendo Switch OLED console brought some differences from the standard Switch, the main one being the display.

Let’s start by showing you what remained the same between the two consoles:

Let’s now detail the points of difference between the two console versions, starting with size and weight.

Although the OLED Switch has a larger screen, it ends up encompassing the frame of the standard model, so the two devices end up having the same height and Joy-Con compatibility.

Another issue that may go unnoticed is the width of the OLED Switch, as well as its weight, which are slightly larger.

As we said initially, this is the biggest difference between the two versions. 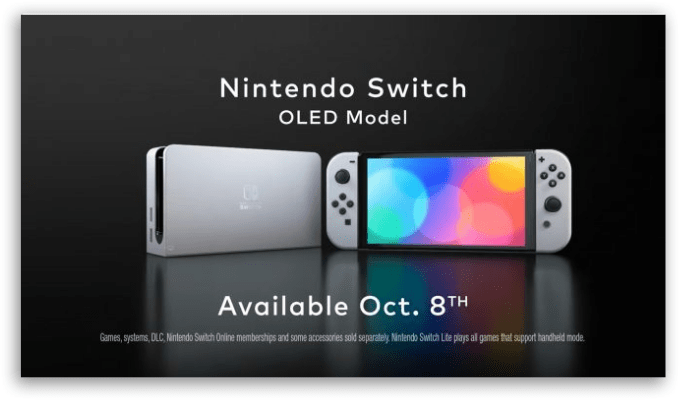 The OLED display highlights the colors and contours in games much more and the viewing angle, compared to the standard version that features an LCD panel, is also wider.

Thanks to this new technology (OLED) the battery life is longer, with a better responsive touch than the previous version.

Also, because the pixels are self-illuminating, the OLED screen doesn’t need such a wide bezel, that is, the Switch OLED console has a 7-inch screen without increasing the size of the console. While on the standard Switch the screen is 6.2 inches.

Despite having twice the storage capacity, maybe just 64GB is not enough to install your games. It is worth considering purchasing a microSD card when purchasing any of the consoles.

Both consoles come with a charging dock, but the big difference between them is that, in addition to TV connectivity, present in both versions, the OLED Switch also connects to the internet through LAN port. The standard Switch is connected via Wi-Fi or using an adapter.

It is worth mentioning that you can buy the dock for the OLED Switch separately, and it is compatible with the standard switch. And, not least, the Switch OLED has a battery that promises to last between 4.5 hours to 9 hours.

Oh, and if you’re having trouble connecting your standard Nintendo Switch console to the internet, check out what to do here.

The stand, on the original Switch, while integrated, is about 10mm wide, which isn’t very big. In the new version, it is adjustable, with a wide variety of angles. For this reason, and for being present on the entire back, it allows a better repositioning for games on the desktop.

How’d you like getting to know better the differences between these two versions?

How about you? Are you part of the 103 million Nintendo Switch users? Tell us about your impression and experiences with the console down below in the comment section!