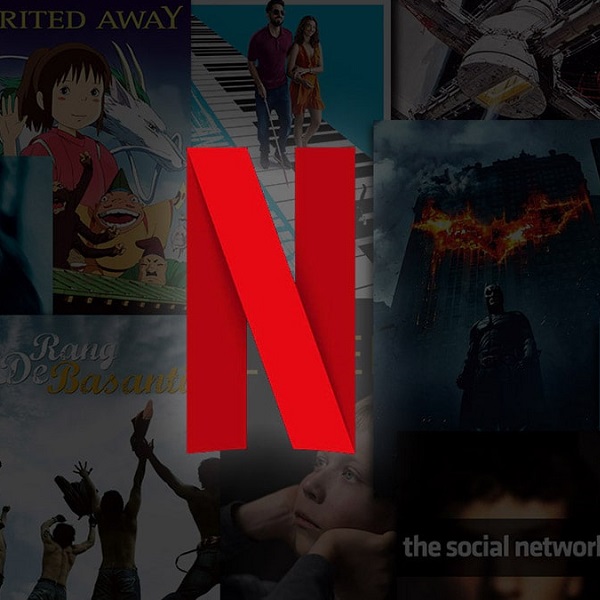 
There is no doubt that Netflix has greatly improved the quality of its original productions in recent years, but one of the biggest surprises was the platform starting to invest in international series. Since the first work was released in 2016, new Brazilian shows have not stopped arriving on Netflix. Perhaps the only problem is choosing which Netflix series to watch first.


It is to help you with this that we have listed some of the best Brazilian shows on Netflix. You can check out all our tips in detail below! 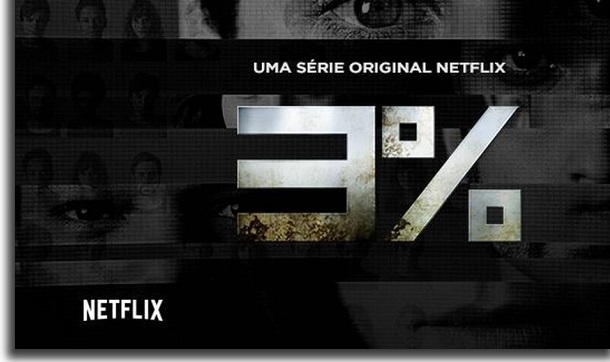 There is no better work than 3% to start the list of Brazilian shows on Netflix. We say this because, for those who don’t know, this was the first show from the country to be produced by the streaming platform.

The plot portrays a dystopian reality, in which young people who are 20 years old can take very challenging tests. All to try to live a better life in one of the only prosperous places left in the world.

But as the show’s name makes clear, only 3% of these youngsters actually manage to pass these rigorous tests.

In this Brazilian sitcom that takes place at the beginning of the pandemic, Dona Isadir (Rodrigo Sant’Anna), a very inconvenient mother-in-law, does not think twice about living at her son’s house and renting her apartment in Cachambi, Rio de Janeiro.

The series bets mainly on the humor of everyday situations that reiterate the social differences between the characters, especially between D. Isadir and her daughter-in-law, who live in constant conflict.

Having recommended 3%, it is also worth talking about Omniscient. For those who don’t know, the two series were created by the same person and have some similar elements.

The story also focuses on a dystopian future, but this time we see people being watched by drones at all times. In the midst of all this, we still accompany Nina, who works at the company that monitors these drones.

Her goal is to elude company surveillance as she tries to investigate her father’s mysterious death. If you found this story interesting, you just need to check it out on Netflix.

It is quite possible that you have at least heard of “Girls from Ipanema”, as it is one of the most popular Brazilian Netflix series on our list. It takes place in Rio de Janeiro in the 1950s and focuses on three women who star in the plot.

The story begins when the protagonist Malu has the money stolen by her own husband. So, she decides to team up with a writer named Thereza and a singer named Adélia in hopes of opening a Bossa Nova bar.

It shows the lives of angels and their tasks involving humans. But when a new angel named Odysseus is created, he begins to question the orders he receives and feels he needs to find out more about the system.

In the midst of this, he ends up leading other angels to do the same and the situation only gets complicated. If you liked the plot, be sure to check it out.

Samantha is another interesting bet for those looking for new Brazilian Netflix series. It focuses on the story of a woman who was very successful on TV as a child in the 1980s.

Unfortunately, her fame only waned over the years until she became a mere memory. But the girl did not give up the celebrity life so easily and does everything possible to return to the spotlight.

The series is very funny and entertaining, so it’s worth checking out.

For those looking for something more involved with the police investigation, “The Faction” is worth watching. Its story shows how an honest lawyer infiltrates a criminal faction.

All because her brother is trapped in that faction and she needs to unravel all possible schemes to try to save him. The problem is that she is faced with several moral issues during the episodes.

Although it is one of the best Brazilian shows on Netflix, Blood Pact is not their original work. In fact, it was produced by the pay channel Space, but it is now available on Netflix as well.

Its plot shows how a TV presenter tries to show very violent news to have more audience than his competitors. But with that, he ends up crossing many limits and is not far from those he shows as bad guys on his show.

The most interesting thing is that the plot is very similar to the documentary series that we are going to show you below.

As we mentioned, we have a docuseries very similar to Blood Pact. Its name is Killer Ratings and it shows the story of Wallace Souza.

He was a presenter of a police program who later became a politician in Manaus. After spending years reporting crimes on TV, he was accused of being involved with them.

Each episode features evidence and testimonies from both sides, so it’s hard to know the truth. There is no doubt that all this mystery makes it one of the best series to do a marathon. 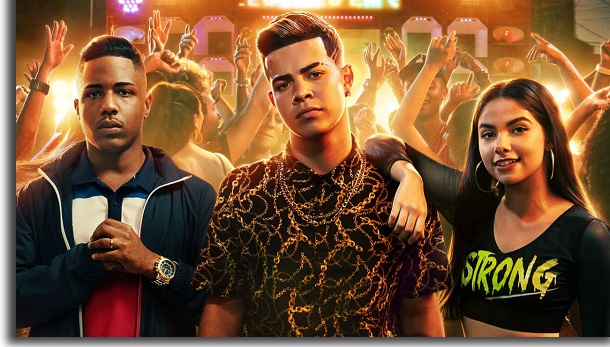 The Sintonia series has the favelas of São Paulo and its residents as the main focus of its stories. We accompany three young friends who do their best to make their dreams come true and improve their lives.

Doni wants to be a successful funk singer, Rita does what she can to support herself by selling different products and Nando gets involved in the world of crime just to help his family. The story is very captivating and worth checking out.

KondZilla, one of the biggest music producers in Brazil, is responsible for producing this series for Netflix. which already has two seasons.

The next suggestion for Brazilian shows on Netflix is another one that was part of the first national works on the platform. The Mechanism focuses on investigations of “Operation Car Wash”, which dealt with cases of political corruption in Brazil.

It’s just good to keep in mind that most of the situations are fictional, so don’t watch it thinking you’ll only see real elements in the series. If you’re a fan of spy or thriller series, here’s a good one.

The Spectros series is an excellent choice for those who like horror series or movies. It is very interesting because it shows a kind of mix between Brazilian and Japanese culture.

That’s because the series tells ghost stories of Japanese descendants in our country. The main scenario ends up being the Liberdade neighborhood in São Paulo, which is one of the largest Japanese communities outside of Japan.

Another excellent suggestion we can make is Guerras do Brasil. This is another documentary series, but this time it displays information and data about some of the wars that took place in our country.

It’s only 5 episodes long, so it’s great for both those who like war shows and those who like marathons. As expected, there are also many reports from experts delving deeper into each war addressed.

Here’s a super cool tip for those who like animated series. The Super Drags series shows a little bit of the drag community, which we really don’t see being explored that much.

The episodes focus on several of today’s great drag queens. Each one going through unusual and funny situations, of course.

We want to mention that the voice cast includes none other than Suzy Brasil, Silvetty Montilla, and Pabllo Vittar. It ends up being a good suggestion for those who like to watch anime or other types of animation.

Based on the homonymous book by Bruna Vieira, this series shows a 30-year-old woman who is unhappy with her life. Wishing to return to the past, she has the opportunity to relive her 15 years old with her current mindset and knowledge.

From there, she tries to fix the lives of the people she loves, but changes, even if small, change the future completely, not always in the best way.

Like so many other Brazilian shows on Netflix, it has a more investigative theme and is focused on suspense.

The story is about a police officer who is investigating a sexual predator but ends up discovering a couple with many secrets. In the midst of this, she is still faced with a very stressful corruption scheme.

The next suggestion is the series called Kissing Game. It is a bit out of the ordinary from the other Brazilian productions that we usually see.

We follow some teenagers in a community in the countryside. Before long, some of them get sick and realize that the virus seems to be transmitted by kissing.

Unfortunately, the disease soon proves to be quite abnormal and has frightening symptoms.

Another interesting tip for those who like crime documentary series is Until Death Do Us Part. Each of the episodes focuses on a different crime, with testimonies from family, friends, lawyers, and even police officers who worked on the case at the time.

As the name of the series already suggests, the crimes are all passionately motivated. It is worth mentioning that as these are real facts, they are very heavy topics and that not everyone may want to follow.

Another good suggestion among Brazilian Netflix series is Mystery Lab. This series arrived very recently on the streaming platform and has a different format from most works of fiction.

It is presented by Felipe Castanhari, who many already know directly from YouTube. Basically, this series tends to give focus on some science and historical mysteries in its episodes. If you want to see more, just access this link.

To finish the list, we have a light and fun suggestion very similar to the soap opera “Malhação” by “Rede Globo”. 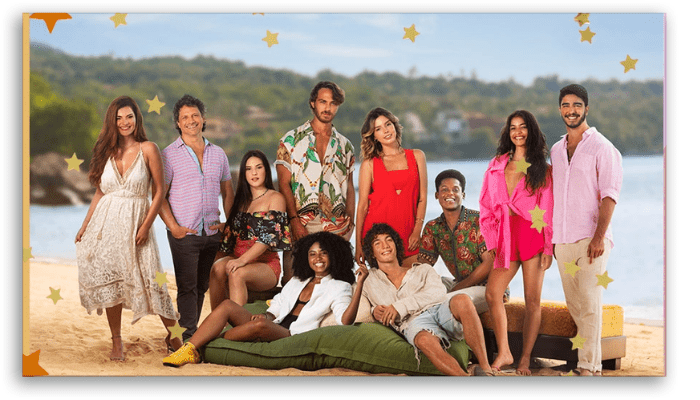 Summer Heat revolves around Catarina, a character by Giovanna Lancellotti who sees her life turn upside down after the arrest of her mother, accused of money laundering and active corruption.

The young woman then starts to live and work in a paradise resort where she starts to live in a new social cycle and a new perspective on life. Together the young people live an unforgettable summer, involving a lot of making out, friendships, betrayal, and secrets.

Did you take advantage of our tips to get to know some of the best Brazilian shows on Netflix?

So share with that friend who loves a series and get ready because in 2022 there are still some Brazilian shows that are going to be released on Netflix such as “Maldivas (Condo Ladies)”, “Unsuspicious”, and “Olhar Indiscreto”. Keep an eye out!