Skip to content
Tutorial Android iPhone
Whatsapp Poll: How to make one?

Whatsapp Poll: How to make one?


WhatsApp is constantly evolving, working on new features like what will make importing your chat backup easier. Another upcoming ability we first discovered back in April would allow you to create polls for your group chats.

Work clearly continues behind the scenes, and now the latest beta version of the app reveals additional details about how polls in WhatsApp chats will work.

WhatsApp has introduced a poll feature for Android and iOS. It is now possible to conduct polls for group and individual chats.

The feature is not yet available on WhatsApp Web. The user can add up to 12 options in the poll and, unintentionally, if an option is repeated in the same poll, WhatsApp sends an alert to it.

Last spring, we took a look at this in-development poll creation interface, allowing you to ask a question and offering up to 12 response options.

The option to create a poll appears as the seventh option in the chat actions sheet, accessible by tapping the paperclip icon in the WhatsApp message box.

WhatsApp’s poll feature is only available for the mobile version and should be coming to the WhatsApp web version soon.

How to Use the New Poll Resource on Whatsapp?

Open WhatsApp on your Android or iOS smartphone, then open the individual or group chat in which you want to create the poll. Then tap the attach gift button next to the message box and tap the Poll icon.

In the poll creation window, add your question and options to select from. You can add up to 12 options.

You can also tap and drag the ‘Hamburger’ icon available on the right side of the poll options to change the order of the options.

After adding questions and options, tap the green submit option. Your poll will be created. WhatsApp allows users to add up to 12 options in the poll. 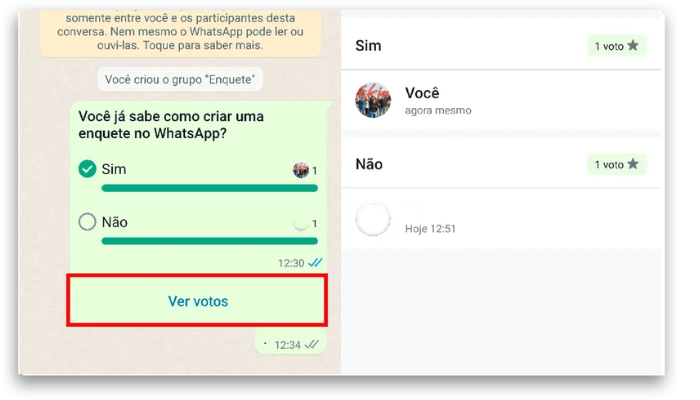 The feature allows users to create a poll and vote on other people’s polls by simply tapping on the available option as per their choice.

The poll is automatically updated each time a new vote is added.

Users can also view poll-related information, such as who viewed the poll results, by tapping the ‘view votes’ option.

So, to access the votes, just go to the poll and tap “View Votes”. You’ll see poll details, including who cast the vote and which option others selected.

Did this tutorial help you?

If so, take a look at these: