Skip to content
Tutorial Android iPhone
What is the meaning of emojis from WhatsApp? 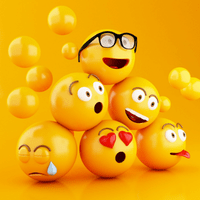 What is the meaning of emojis from WhatsApp?


Have you ever experienced any discomfort or trouble for not understanding the meaning of emojis you received on WhatsApp?


Some can transform relationships if they are not well understood, right?

Thinking about it and thinking about helping you not to go through problems with a crush, and even with your co-workers, we made a list to save you. 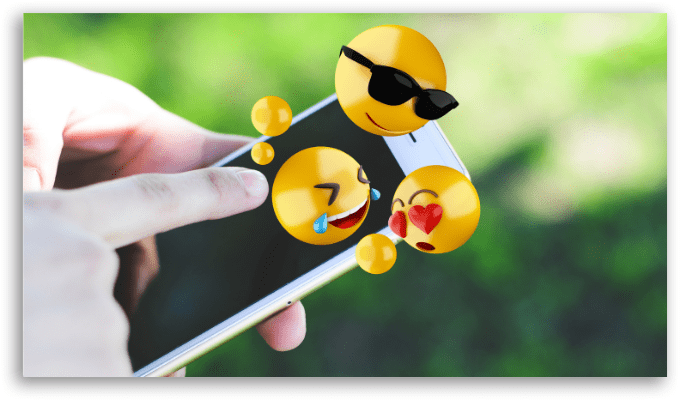 It is on WhatsApp that, at least for now, we use emojis the most in our conversations. These graphic representations emerged to help us convey an idea, an emotion, or a feeling.

They were created in the 1990s by Shigetaka Kurita in Japan. The term emoji is a combination of two words, which are: “photo” and “character” in Japanese, meaning “image character”.

Emojis end up helping a lot by replacing some messages and even making them shorter.

Another important issue to be raised is that, sometimes, these symbols help to strengthen communities on social networks, for example. Some emojis such as the rocket 🚀and fire 🔥 have become a fever in many groups and messages on social networks such as Instagram, YouTube, and TikTok in the reactions of users to their dear influencers.

However, as we said above, some people may not be very clear about the meanings of certain emojis and may be paying lip service to send these symbols. Oh, and of course, we need to point out that emojis for iPhone and Android are different.

In WhatsApp, for example, the iPhone uses standard Apple symbols.

With all this in mind, think with me, there are still so many other icons for you to explore, in addition to the basic ones for everyday use that are already saved in your “recent”.

Did you know that there is even an Emoji Day?

Celebrated every July 17th, Emoji Day celebrates the day of these very special characters that are part of our routine.

Every year, on this day, the World Emoji Awards website publishes the list of the best emojis of the year. You can check the 2022 list by clicking here.

So, let’s take the opportunity to get to know some of the most controversial, fun, most used options and, of course, the ones recommended for crushes and for work.

We start our list with some of the most confusing emojis among users. Pay attention to the meaning of these emojis to understand the controversies.

If you have one in mind, check it out if it’s on our list:

A lot of people think, and use this emoji as if it were the representation of the famous “high five”. But this united hands symbol represents gratitude.

It can also be used to represent prayer and spirituality.

This symbol represents disapproval or even a positive response full of irony. However, be careful, as it has been popularized with a suggestive intent.

In some chat apps, like WhatsApp, many users tend to use the new moon face to symbolize sexual interest in someone.

Speaking of moon faces, another one that has also been having its meaning deviated is the full moon. She is often sent in a tone of sarcasm and irony.

However, it has gained a sexual connotation in recent years, which may indicate interest in the person to whom it sends.

Very controversial, the meaning of this emoji ended up being banned from an Instagram hashtag in 2015 because of its double meaning, as it became associated with the male reproductive organ.

The person with folded hand

This emoji is the Information desk person, and it was created to be a symbol of help and resolutions, the typical “how can I help you?”. However, most of the time it is used to convey sarcasm or sass.

To end this list, a controversy. For you, is this emoji snorting or celebrating a triumph? Yeah, well… it really looks like he’s huffing with anger, but according to the developers, the second option is the correct one. The meaning of this emoji represents a triumph for some achievement.

The first emoji on the list of the funniest couldn’t help but be those happy emojis that are usually used to indicate that you’re having fun.

Your funny way of being can also be the meaning of that emoji, or that confirmation of something that was said, with a naughty wink.

There are a few versions of using this emoji.

One of them, more literal, is to express that one is “melting” of heat or even of love for someone. But it can also be used to ironically demonstrate that it’s “going down the drain” in a funny way.

From the famous trio of wise monkeys ( 🙈🙉🙊), this emoji that represents a Japanese proverb has gained many meanings in message exchanges.

According to the proverb, the trio would represent: “See no evil, hear no evil, speak no evil”, but it is usually used when you feel embarrassed or when you want to demonstrate that you don’t even want to see the message.

You know that moment when you think everything went wrong, that’s usually when you can appeal to that emoji. Despite having many meanings, it can also convey emotions such as disapproval, nervousness, embarrassment, discomfort, and even disgust.

Super fun, the meaning of this emoji can be either when you’re playing with someone or it can even indicate that you’ve had too much alcohol at a party.

Meaning of Emojis to use with the crush
Heart on fire❤️‍🔥

To start heating things up, let’s unite the meaning of the heart emoji, which aims to demonstrate your passion, with the fire that can indicate the feeling of desire. And let’s set this love on fire!

Now if your relationship is at that moment when you realize your feeling is growing, like this heart, you can use it sparingly.

There is another meaning to this emoji as some people interpret it as a beating heart or an overwhelming passion. But be careful as this accelerated may seem like you’re scared.

Now if you’re still in the conquest, flirting phase, pay attention to this mischievous little face.

We often use it when we want to communicate self-confidence and smugness, but it goes very well with cheeky jokes.

So if you want to insinuate something that is implied in the message, jump on that emoji.

And how can you show, in a fun way, that you’re so in love, you’re drooling over someone? Simple, using the drooling face, which can demonstrate your desire for something, a person, food, or an object.

Just be sure to send the message correctly as it could also represent that you slept soundly to the point of drooling.

If you want a more mischievous tone, you can opt for the horns on this smiling face. It’s ideal to send to your partner, with a double-meaning joke and/or with a saucier innuendo.

Oh, of course, without forgetting that this symbol also matches those reports of pranks or suggestive messages. Watch out!

We often confuse the meaning of heart emojis due to so many colors, don’t we?

Let’s see if we can now help you to use each one at the right times, depending on its color:

We know that the practices of using emojis in the work environment have been growing and expanding to use in emails, for example. However, this can increase the potential for misunderstandings.

The idea is to understand the functioning of emojis in the relationship with customers, internal and external, to complement the texts and maintain the context.

People connect with people and, despite the growing activity online, we are very happy to know that on the other side is not just a robot, but a human being who will lead us through the process.

In this way, using the core of human-centered emojis is a safe bet and a way to improve the relationship with the public.

There are emojis that define the particularities of groups and, if your company offers services to this audience, using these symbols is a way to bring them closer to your brand.

Let’s agree that, in work communications, whether with the team or with customers, emojis that show negative emotions can frustrate message recipients. So in this environment, we recommend avoiding them.

Best emojis to use at work👍🏻😉✅

Now, the meaning of some emojis is interpreted almost by default by all users and, therefore, is safe to use in a corporate environment without any problems.

Emojis like the “thumbs up”, the “wink” and the “task complete” symbols are some examples of emojis to use at work without problems.

Some other emojis that use fingers to demonstrate something or point to links (👇🏻👉🏾) are also welcome.

Most used emojis in the world

According to a survey conducted in February 2022 by the company Crossword-Solver analyzing 9 million geotagged tweets around the world, these are the main emojis used around the world. 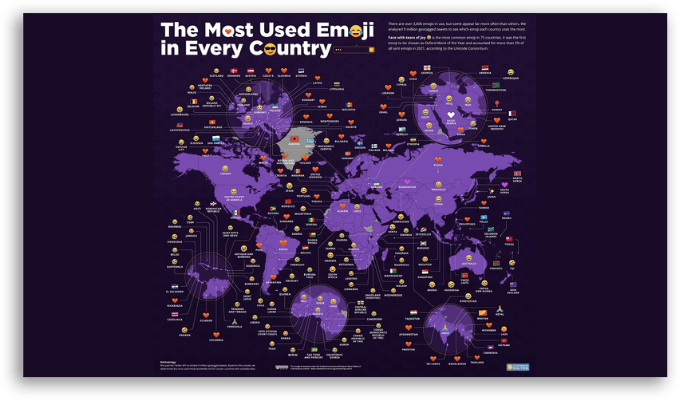 The research reveals that, in much of the planet, users use the emoji  😂 “cry with laughter”, which is the most common in 75 countries. Behind it, is the ❤️ “red heart” emoji.

In 2022 we had the launch of 20 new emojis. The much talked about skin tone variations have expanded and the news: face trembling with scared air, the Wi-Fi symbol, and three new heart colors.

But a new update is coming. Between late 2022 and early 2023 users will receive:

Difference between Emojis and Emoticons

Finally, we brought the ancestral darlings: the emoticons.

An emoticon is a combination of the English words emotion and icon. Before emojis, emoticons were the darlings and our only option. These typographic symbols, together, form figures that help us to simulate our emotions

Some examples of emoticons for you to use on your keyboard, and their meanings are:

Did you like to know the meaning of emojis from WhatsApp?