Skip to content
Tutorial Android iPad
The 20 best Netflix movies to watch in 2022! 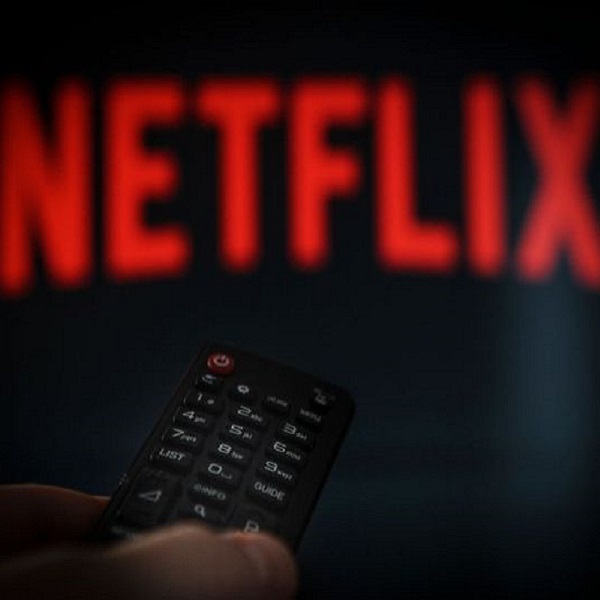 
Netflix is ​​one of those platforms that doesn’t even need formal introductions anymore. This is easily one of the best sites to watch movies and series with a library that puts other streaming services to shame. It is possible to find original productions and productions from other studios there, but after all, what are the best Netflix movies in 2022?


With so many options available, it’s really hard to decide what to watch. That’s why we’ve decided to help you by selecting what we consider the best Netflix movies to watch in 2022. So, if you want to watch new and interesting movies, just check out the suggestions below!

If we’re going to talk about the best Netflix movies you can watch in 2022, The Power of the Dog can’t be left out.

The film had more than 12 Oscar nominations, and won the statuette for Best Director, for Jane Campion. Based on a book, this western drama stars Benedict Cumberbatch, Kirsten Dunst, and Jesse Plemons in the cast.

The Power of the Dog follows the story of two wealthy brothers, Phil (Benedict Cumberbatch) and George (Jesse Plemons), who run the family farm in Montana. The relationship between the brothers takes a turn for the worse when George marries Rose (Kirsten Dunst). Phil wages a veritable war of threats against his brother’s new wife and teenage son.

The teenager is frowned upon by the farmer, who makes it clear that he is not welcome on the property, until old secrets come to light. 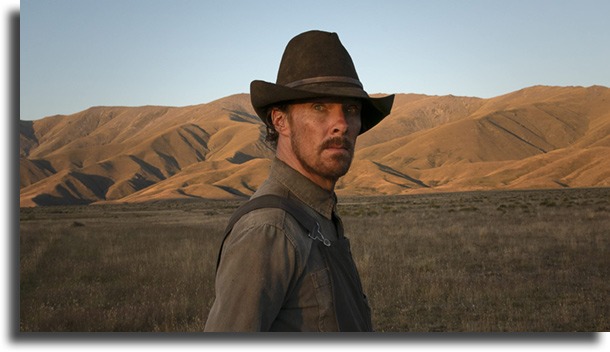 Against the Ice is a Danish film based on the true story of the Arctic Expedition of Denmark, led by Captain Ejnar Mikkelsen in search of a lost map.

In 1909, the Expedition tries to resist the United States’ claim to northeast Greenland and Captain Mikkelsen embarks on a journey across the ice with his colleague Iver Iverson to find proof that Greenland is an island. The journey, however, will prove to be much more complicated than expected, subjecting the expeditionaries to hunger, extreme fatigue, polar bear attacks, and paranoia.

This adventure that mixes the past and the future has as its protagonist Adam Reed, a 13-year-old boy who lost his father a year ago.

One day, he finds an injured pilot hiding in his house’s garage and that’s where it all begins. This mysterious man is Adam himself many years older, who has gone back in time to undertake a secret mission. Together, they must embark on an adventure into the past to save their father. However, there’s a problem: the two Adams don’t get along at all.

A great choice to watch with the whole family, this animation directed by Eamonn Butler and Dave Rosenbaum brings the story of Keegan and Moya.

These two kids are having a hard time and they meet two magical moose who teach them how to dance. Through Riverdance the friends learn to deal with their emotions, finding joy and hope again. 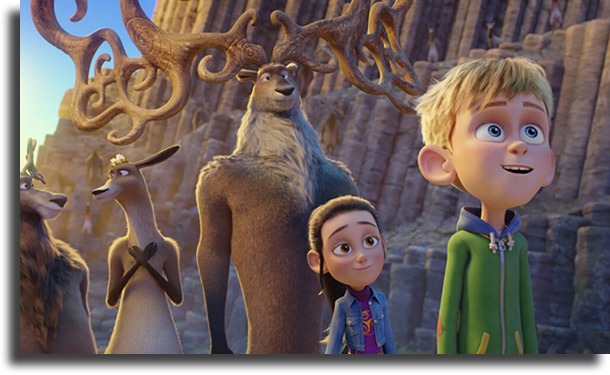 A beautiful romance with gorgeous scenery takes a spot on our list.

Without Saying Goodbye is a film set in Peru, in the midst of its beautiful landscapes, with a workaholic architect whose mission is to build a luxury hotel in Machu Picchu.

However, he ends up falling in love with an artist and this meeting changes them both forever.

Also based on a true story, this British spy film is set in 1938, during the Munich Conference, where European leaders attempt to stop Adolf Hitler from invading Czechoslovakia and starting another global conflict.

The film follows friends George MacKay and Jennis Niewöhner who work on opposite sides of the government and become spies. The two are tasked with a mission, which aims to reveal to world leaders, including Neville Chamberlain, Prime Minister of the United Kingdom, a confidential document that proves Hitler’s plans to expand German territory.

The hope is that Chamberlain does not go ahead with the plan togive the Sudetenland to the German head of state.

Another sensational movie that’s also based on a true story makes our list of the best Netflix movies to watch in 2022.

This feature, which can be an excellent option to watch as a family, tells the story of Ruby, a very smart and uncontrollable dog who is adopted by Daniel O’Neil, a hyperactive and dyslexic soldier, who dreams of entering the Rhode Island K9, an elite police academy.

From that meeting, Ruby, who would be sacrificed, gains a new chance, facing setbacks on her journey, but with the help of family and members of her community, who support and cheer for her success, they overcome their challenges together.

The In Between is a supernatural love story that focuses on teenage Tessa (Joey King) and Skylar (Kyle Allen), a true romantic.

Tessa, after bouncing around in foster homes for most of her childhood, doesn’t believe she deserves her own love story, but Skylar manages to break that barrier. However, when this girl’s heart begins to open, tragedy strikes. Skylar does not survive a car accident suffered along with Tessa.

As the girl searches for answers after the accident, she believes Skylar is trying to reconnect with her from the afterlife. With the help of her best friend and a newfound belief that love never dies, Tessa tries to contact Skylar one last time in order to give the love story the epic ending she deserves.

Will Smith makes an entrance in our list as well as in the Netflix catalog.

In Gemini Man, a secret government agency has a mission. For that, they end up creating a younger and stronger clone of a recently retired sniper.  What For? Killing him. 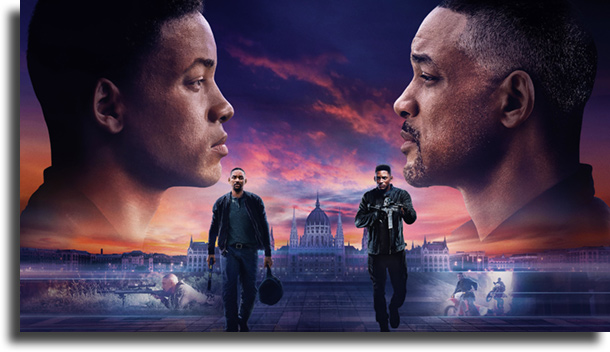 If you like suspense, you’ll love The Weekend Away.

On a vacation trip to Croatia, after her best friend disappears, Beth must prove her innocence. But her attempts to discover the truth reveal dark secrets that involve people very close to her when she realizes she is involved in a web of lies.

Based on the book of the same name by Sarah Alderson.

Ruth (Sandra Bullock), has just been released from prison after serving time for a violent crime, but it will be difficult to get back together with people who don’t want to forgive her for what happened.

Living badly in a place where she once considered her home, her only hope is to find the sister she was forced to leave behind. The cast includes Viola Davis, Jon Bernthal, and Vincent D’Onofrio. A drama that portrays the struggle of an ex-convict after serving 20 years of sentence who tries to take her life back.

Directed by Nora Fingscheidt, the drama and thriller feature film was based on a miniseries of the same name and deserves to be among the best movies on Netflix in 2022.

Action and twists are what you can expect in a film that features Dwayne The Rock Johnson.

In Red Notice, FBI investigator John Hartley (Dwayne Johnson) goes in search of the world’s most wanted art thief. What he didn’t realize is that he would have Nolan Booth (Ryan Reynolds) as a partner to arrest a very smart thief “The Bishop” (Gal Gadot). The three live a real adventure around the world.

This Brazilian feature could not be missing from our list of the best movies on Netflix for 2022, as it has been conquering critics and audiences.

This drama and thriller directed by Alexandre Moratto tells the story of a group of teenagers who live in precarious conditions and accept a job offer in a junkyard. Suddenly, they realize they’ve been lured into a human trafficking ring.

With no other escape, one of them starts to act as his captor’s helper, leading the viewer to reflect on the harsh reality of modern slavery.

Fourteenth on our list, we bring an indication that has divided opinions.

Georgia finds out she is pregnant on Christmas Eve. Despite all the difficulties and the unstable love relationship, the pregnancy progresses with some tranquility. Everything changes suddenly when artificial intelligences start attacking humans.

From there, she and her partner are forced to cross the country, taking countless risks, in search of a safe place for their family. 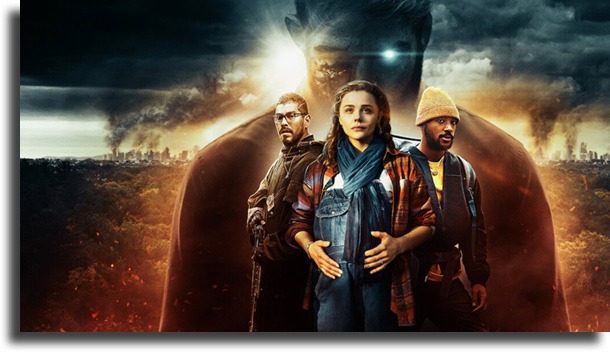 In this prequel to Army of the Dead, a mysterious woman recruits bank clerk Ludwig Dieter (Matthias Schweighöfer), whose life is completely changed when he joins a group of some of the most wanted criminals in the world.

The idea is to break into the three legendary and super-protected safes of the EuroPan.

The British production mixes elements of drama and psychological thriller in a shocking plot, directed by Kristoffer Nyholm where three lighthouse watchmen on an uninhabited island find a chest of gold. Now they must decide if they will keep the fortune and accept the consequences.

What many fans don’t know is that the strange plot of the film is inspired by a surprisingly true story of the disappearance of the employees of the Flannan Islands Lighthouse, which took place in the year 1900.

The British Royal Air Force, in March 1945, continued its mission at the Gestapo headquarters in Copenhagen, bombing the site.

The film is based on real events and brings the terrible event during World War II in which suicide bombers accidentally hit a school full of children, killing more than 120 people.

From acclaimed Spanish filmmaker Pedro Almodóvar, Madres Paralelas features Penélope Cruz as the protagonist in an emotional and sensitive narrative.

The story revolves around two single mothers who meet in the hospital and go into labor on the same day.

As is expected of Almodóvar, the drama brings up complex issues and shows motherhood without idealizations. In addition, he manages to unite the narrative with historical elements referring to the Spanish Civil War and the murders committed by the Falange Española, a fascist group of the 1930s.

The 2021 Italian film is produced by Marco Tulio Giordana. Based on a shocking true story, it presents the case of the murder of young gymnast Yara Gambirasio in 2010, when she was 13 years old.

With a complex investigation, the culprit is found after a series of DNA analyses on several people. Prosecutor Letizia Ruggeri maintains an arduous investigation to solve this brutal case, the feature brings details of some steps of the investigation.

The movie with Leonardo DiCaprio, Jennifer Lawrence, and Meryl Streep is directed by Adam McKay and could not be missing from our list of the best movies on Netflix in 2022.

Considered a metaphor, this sci-fi comedy depicts two astronomers discovering a deadly comet heading towards Earth. However, nobody believes the story that a comet will destroy the planet within six months.

From there, they seek to alert the media but are discredited and ridiculed.

The film broke audience records when it was made available on Netflix. 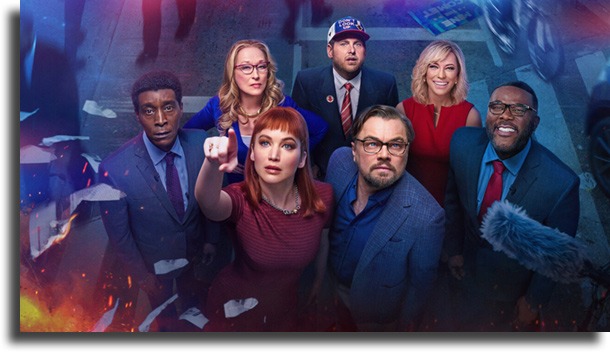 So don’t forget to share with that friend who loves a good movie – or even someone who liked Bright and might enjoy Gemini Man, even – and take the opportunity to also see our list of the best Netflix series to binge.