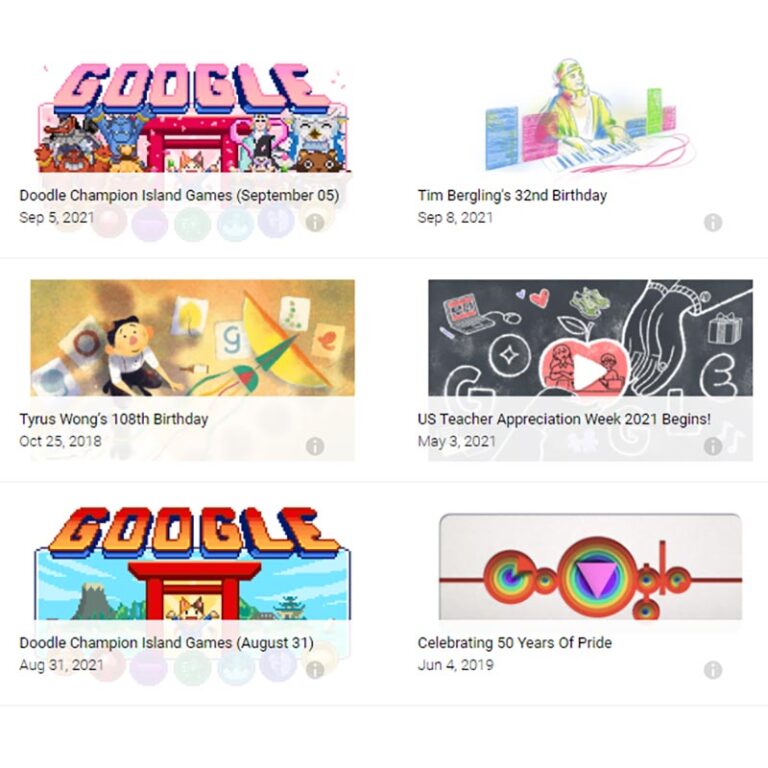 
Whenever it comes to a special date, we see new Google Doodle games on the main page of the most used search engine in the world. Even if you don’t know them by name, you’ve probably come across Doodles in some way. These are special, temporary changes to the Google logo on days of celebration of birthdays, events, and historic dates.


In the beginning, many of these Doodles were just aesthetic changes, but now it’s quite common to see a little game representing the celebration at hand. As some of them are so much fun, we’ve selected and listed some of the best browser games from Google Doodle. Check them all out below!

To start our list, we have a Google Doodle that we’re sure anyone would enjoy. Made in celebration of the 30th anniversary of Pac-Man’s release, this game is simply a re-creation of the classic game.

Basically, you can play Pac-Man in your browser at will using just the arrow keys on your keyboard. If you’re interested, you can see if you can try to get the highest score possible by accessing the Doodle at the link.

Another interesting birthday celebration was the 40th anniversary of the invention of the Rubik’s Cube in 2014. As you can imagine, this Doodle gives you access to a virtual cube that you can try to solve using the mouse or touching the screen.

It’s a lot of fun, but it will still be a challenge for those who still don’t know exactly the easy way to solve such a cube. If you’re ready to spend a few minutes with this Doodle, just check out the link.

When the 2012 Olympics kicked off, Google thought it was a good idea to dedicate one of its Doodles to one of the sports. The chosen one was basketball, with the game giving you several balls to try to score points from the basket.

The cool thing is that the distance between the player and the basket changes, so you need to plan your moves carefully. You can choose how hard the ball will be played and take that distance into account. If you want to play, check out more on this Doodle link.

Of course, Basketball wasn’t the only sport to be honored during the Olympics games with a Google Doodle. Soccer also got its own fun browser game.

In this game, you act as the team’s goalkeeper and need to prevent any goals from being scored. It is possible to move sideways and jump to dodge the balls kicked into the air. If you want to try your luck, just click on the link.

As for Halloween 2016, Google decided to make an original and super fun game. It puts you in control of a cat that can perform spells using its magic wand. The challenge is that he is constantly being attacked by ghosts.

The only way to defeat them is to draw symbols with your mouse or finger on the screen, which creates the wand attack spells. Each ghost has its symbols on top of its head, so it’s easy to know how to defeat them. The tricky thing is that they can appear in packs and have more than one symbol needed for their defeat.

In 2017, Google decided to celebrate 44 years of the creation of Hip Hop with a really cool Doodle. It lets you be the DJ of the day, as there are some of the records used in the birth of this musical style that you can use in your beats.

You can select any of the available discs to make your own combinations. Although the controls are limited, you can have a lot of fun. If you found it interesting, check out the link.

To celebrate 50 years of programming for kids, Google made one of the most fun Google Doodle games in 2017. It puts you to control a bunny’s movements through basic programming concepts.

The concept is super interesting and makes the game a lot of fun. If you’re curious to find out more, you just need to go to this Google Doodle link!

In celebration of Garden Day in Germany, Doodle this time brought us a very fun game involving the gnomes that are on the lawn. You have several types of gnomes and you can throw them around the garden.

The objective is to see the distance you can get with each one, as they all have their characteristics. If you want to know more about this game, just follow this link.

Among the Google Doodle games, there’s one perfect for fans of the Doctor Who series. This game was created in celebration of the 50th anniversary of the creation of the series, back in 2013, and features all the different versions of the Doctor.

You have to go through the levels, perform small puzzles, avoid enemies and complete the objectives. If you die, you start playing with the next version of the Doctor, as would happen in the series. To learn more about it, you can access the link.

To close our list of the best Google Doodle games, we have the little game they made on Valentine’s Day 2017. In this Doodle, you control a pangolin who realizes he forgot to buy a gift for his beloved.

To resolve the situation, he decides to bake a cake, but needs to get some nuts to do it. Your mission is to collect as many nuts as possible through the level before time runs out. -To check out the game, check out this link.

Did you take advantage of our tips to discover some of the best games on Google Doodle? So don’t forget to leave your comment telling us what you thought of the suggestions and which game you found the most fun!

Come check out our guides on how to recover a Google account and how to create download links on Google Drive.