Skip to content
Tutorial Games Mac
Everything about Biotech, the new RimWorld DLC!

Everything about Biotech, the new RimWorld DLC!


Raise a family with children, experiment with genetic modification, and command your own army and mech workforce in Biotech, the new RimWorld DLC!


The sci-fi colony simulator RimWorld is capable of generating some scenarios that could make The Sims 4 blush, and the recently announced Biotech expansion is going to keep that trend going!

You see, Biotech introduces pregnancy, parenting and families. It doesn’t stop there, because now there is also genetic engineering.

Your character will also be able to psychically command semi-living machines, thanks to a special implant, controlling them remotely.

RimWorld’s newest expansion, Biotech, is now available. Alongside the release of the expansion, developer Ludeon Studios also released a new trailer highlighting some of Biotech’s features. Check it out below!

The essential part of the new RimWorld DLC is the addition of families to the base game. With the expansion, players can now see their settlers have children and raise their own families.

Several options are available, including surrogate birth and even the ability to gestate embryos in machines.

Along with the addition of families comes the addition of children to RimWorld. Players will be provided with many tools to help raise their children, keep them happy and educate them, allowing them to spend time in class, explore nature or even talk on the radio, among other things.

Other features of the Biotech DLC include the addition of new xenohuman factions, the addition of the vampire-like Blood Eaters, and the ability to turn colonists into mechanizers – a person with brain implants that allows semi-living machines to psychically command called mechanoids.

There are also new super-mech bosses, as well as new pollution mechanics. 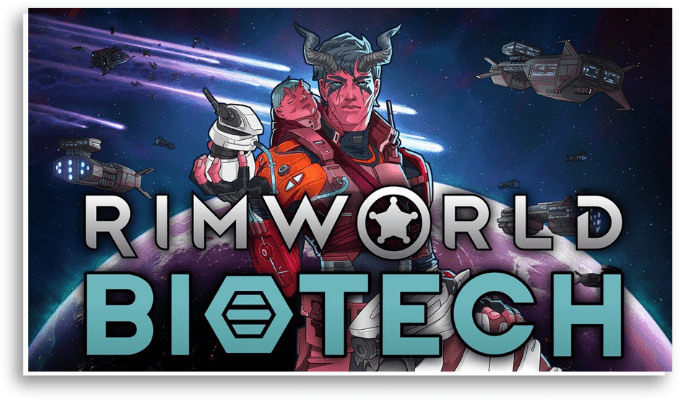 Have children and start a family by natural or artificial means. Settlers can give birth or use a surrogate mother, take in a flock of orphans, and even generate embryos in machines.

Play matchmaker with your settlers or let your relationships grow organically. Get ready for childbirth and care, and get ready to welcome your little ones to the world!

The new RimWorld DLC, you’ll have a family system looks a lot like real life. You can choose to take good care of children, educate them and send them out to be happy and productive members of society.

Or you can treat them like a resource, setting up grow vats to produce cheap, disposable workers.

Genetic modification means you can take these little rascals, or adults, and do everything from changing their eye color to making them immortal fire-breathing people.

If you don’t like any of that, you can become a mechanist, commanding legions of emotionless robotic slugs to do your bidding.

Biotech: take care of your babies

Keep your baby’s tummy full with lots of good food, decorate an adorable nursery to play with, and build a comfy crib for a good night’s rest. Happy babies make happy settlers.

Biotech: take care of your kids

Give your children a rich and happy childhood by balancing your life between work and play.

Help children fulfill their learning desires by letting them explore nature, talk on the radio, spend time in class, daydream, doodling, and watch adults at work.

Grow vats offer a cheaper alternative to normal child rearing. You can use vats to accelerate your children’s development to quickly produce soldiers and simple workers.

In this new RimWorld DLC, you can create your own genetically modified colonists known as xenohumans.

Recombine genes to make bizarre and advantageous combinations of traits and build your colony of xenohumans!

Biotech: get to know the new xenohuman factions

The factions are completely different from each other – how you deal with a group of fire-breathers will be different from stopping the wolf scouts sent by marines.

Some xenohuman cultures are friendly, while others are hostile or prefer to be left alone.

Bloodphages pass among humans undetected as they hide superhuman powers and work to satiate their genetic need for blood.

You can join their cult if you are deemed worthy, or force them to grant you immortality.

With the new RimWorld DLC, you can transform your colonist into a mechanist – a person with a brain implant that allows them to psychically command semi-living machines called mechanoids.

Create mechs by farming them inside high-tech gestator tanks and command a wide variety of new combat and work mechs.

At home, make mech workers who can craft goods, rescue and care for settlers, build and repair structures, sow and harvest crops, transport things, and other tasks.

Grow your swarm and make your mechanic become an unstoppable mechlord.

Summon three new super-mech bosses to fight. Defeat these super-deadly enemies and their minions and collect special mech chips from their smoldering husks to advance your mech tech.

Your mech infrastructure produces packages of toxic waste. Left unfrozen, the waste deteriorates and leaks pollutants into the environment.

This brand new RimWorld DLC is its biggest one yet. That’s why Biotech was almost divided in two parts.

Along with the new expansion, the developers are also releasing a free 1.4 update that brings a host of changes, from a new rotten lung disease to “really useful shelves”.

The update is only on the unstable branch of the game for now, so modders have time to adjust their releases. You can read the full details of the Biotech expansion and the 1.4 update here.

We rated RimWorld as one of the 20 best survival games for PC!

RimWorld’s Biotech is on Steam, GOG and the Epic Games Store for around $24.99. The Biotech expansion was released in October 2022.