Skip to content
Tutorial Mac Web
Games to play in pairs on PC: The top 22! 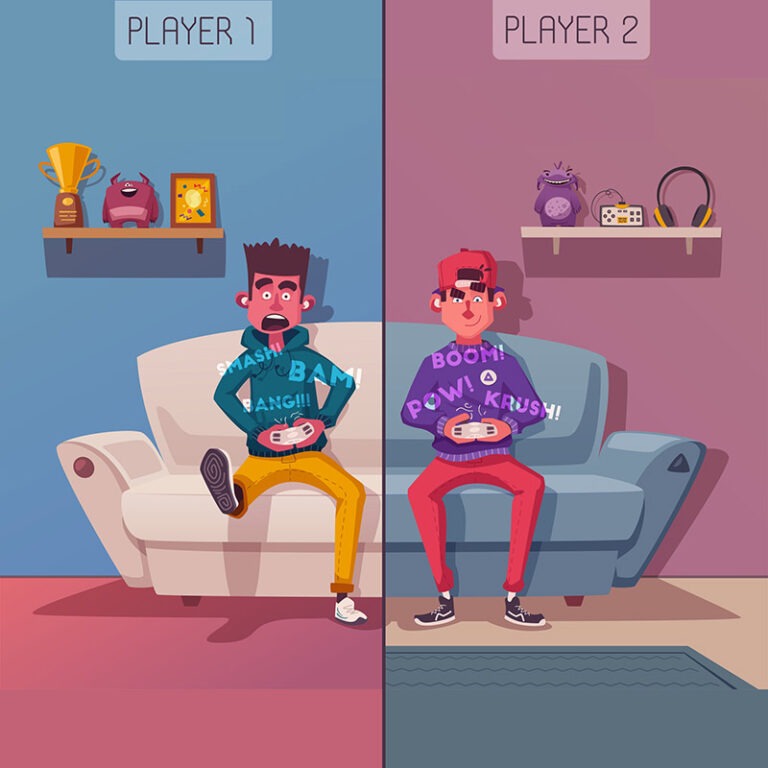 
Playing online with unknown people can be really fun, especially in genres that are more geared towards this type of interaction, with big popular titles like Fortnite, Overwatch, World of Warcraft, etc. However, not always what you are looking for is a game with hundreds of people.


If you are looking for games to play in pairs, with your family, partner or colleagues, check out our list. We’ve included several games with co-op mode so that you and at least one other player can have fun without having to worry about interference from several other players online!

To start our list, we have Blazing Chrome, a game developed by the Brazilian independent studio called JoyMasher. Blazing Chrome is almost a tribute to the classic Contra titles for Nintendo, where you and one other player can choose from up to four characters (two need to be unlocked).

The platform has a lot of action and excellent 2D graphics in pixel art, reminiscent of classic console games. Check out the game trailer and learn more about Blazing Chrome on the Steam page.

Being the second game in the Portal franchise, Portal 2 is definitely one of the best games to play in pairs. In it, you and another friend will be able to go through different stages, solve puzzles and abuse the weapons capable of opening portals through the maps and levels of the game.

Portal 2 stands out for reinforcing the possibilities of interaction between the two players, who can directly help each other to discover the best way to pass the levels. Also available on Steam, access the link and learn more about the game.

For Minecraft-style game lovers, Terraria is an excellent option that brings a lot of the elements in a completely different way, as it is a 2D game. In Terraria, you can destroy blocks, build your fortress, collect materials, forge equipment and defeat different types of monsters.

One of Terraria’s great differentials is that the game’s maps are generated randomly, that is, you and your friends will be able to explore several different maps without repeating the same scenario. Access the Terraria page and check it out!

Stardew Valley has been one of the most popular titles since its release and also couldn’t be out of our list of the best games to play in pairs. In it, you and your friends can work together to develop your own farm, raise animals, plant plants, fish, etc.

In addition, the game also has small aspects of exploration and combat, even if this is not the focus. Access the link and have fun in Stardew Valley.

Left 4 Dead 2 is an extremely well-made and also very popular game, developed and published by Valve itself – also responsible for titles like Half-Life and Counter-Strike. In it, you and your friend will be able to enjoy the FPS with horror elements while trying to survive in a post-apocalyptic scenario.

For those who like classic RPG titles, like Dungeons & Dragons, Pathfinder, among others, Divinity: Original Sin 2 is an excellent option. In it, you and your friends can create characters of different races and classes to venture into one of the best games of its kind.

Tactical combat makes everything more interesting, allowing each player to have a lot of influence and it is possible to create strategies with their partner. Check everything about the game through the link.

Don’t Starve Together is one of the best games to play in pairs, as its name suggests. It is a survival game, where you and other players have to do everything possible to collect resources and stay alive in a very weird world.

The graphics are also very charming, being done in 2D with a unique style and featuring an excellent soundtrack. Visit the Don’t Starve Together page and learn more about the game.

GTA V is one of the most famous titles in the world and also offers the option for players to play in pairs. In it, you and another friend can get together to do missions or just play around.

The third-person open-world game features hundreds of content options for you to enjoy. Access the GTA V page and call your duo to play.

We couldn’t miss out on featuring Diablo 3 after including several “Hack N’ Slash” titles on our list. Even though it wasn’t nearly as successful as its predecessor titles, the game is still extremely fun and offers a great setting for those who like something darker.

Diablo 3 originally offers four classes and features an expansion pack plus one class that can be purchased separately. Team up with your partner and defeat the monster hordes of the hell lords. Check out more by visiting the official page.

Path of Exile is a game that reminds a lot of the classic Diablo game franchise, as it is a “Hack n’ Slash” with lots of action. However, it has really distinct classes, as well as an extensive progression and customization system, which essentially allows you to create the character however you want.

From the game’s campaign mode, you have the opportunity to play in pairs going through the various acts as you evolve, defeat bosses, and collect treasures around. The game’s history is also quite interesting and, the best part, it’s free. Access and check it out.

Similar to Terraria, but with a spatial setting, Starbound is also a great choice among the games to play in pairs. In it, you create a character from the different alien races available in the game and can explore different planets aboard your spaceship.

While on the ground you can destroy blocks, hunt enemies, forge equipment, build your fortresses and even find bosses in caves hidden in the depths of the planets to gain treasure. The game has great 2D graphics, check out the trailer by opening the page.

With beautiful and polished 3D graphics, Torchlight 2 brings you a very interesting experience for lovers of the “Hack N’ Slash” genre. In this action RPG, you and your partner can explore several different maps, defeat increasingly powerful enemies and collect equipment.

The game’s classes are really fun and offer distinct gameplay as well as a great progression system. Check out more about Torchlight 2 on the Steam page.

We couldn’t leave Monster Hunter: World off our list of games to play in pairs. In it, you’ll be able to fight against several giant monsters, collect their materials and use them to forge weapons, armor, and other equipment that can help you during your hunts.

The game has a cooperative playable story mode and also allows you to simply list different hunts for each of the dangerous monsters available. Visit the Steam page and discover one of the best PC games of all time.

Risk of Rain 2 has stylized 3D graphics and excellent gameplay, making it one of the best games to play in pairs on PC. With rogue-like elements, explore different randomly generated worlds, defeat different enemies, collect treasures to improve your character.

The game really offers a lot of action, in addition to excellent boss battles. Check out more about Risk of Rain 2 on Steam via the link.

You certainly have at least heard of Minecraft once while searching for online games to play as a group on PC. Considered an international phenomenon, Minecraft is a great example of how a game can give players so much freedom and keep them having fun for years to come.

In it, team up with another player, mine 3D blocks, build your fortress, defeat enemies at nightfall and, if you’re interested, explore the world of the Nether and even defeat a dragon to finish the game. Access the official Minecraft page and ask your partner to play.

Bringing a huge infestation of rats and other types of worms, Warhammer: Vermintide 2 is considered one of the best games in the franchise released to date. In it, choose between characters with different abilities and characteristics to destroy hordes of enemies in this “Hack n’ Slash” in first person.

The game’s 3D graphics are really good and you can expect a lot of blood as you shoot and tear at the various types of enemies available. Access the game page via the link.

Released in 2018, Deep Rock Galactic features a first-person shooter and presents very well how a game can offer exploration to its players. In it, fight alien enemies on different worlds while digging into its depths for treasure.

The game is really a lot of fun and is constantly getting new updates since its release date. Learn on Steam all about Deep Rock Galactic.

Children of Morta could not be left out of our list either, as it offers great gameplay and many hours of fun for you and your partner. In it, you choose from one of the Bergson family members. One of the coolest things is the constant free DLC updates!

Each of the members has their own characteristics, distinct personality and different abilities, including hammers, magic, bow and arrow – and these are the skills you’ll need to use to explore the game’s dangerous dungeons. Access the page and check it out.

Trine 4 offers one of the most charming 3D graphics from all platformers on our list. Released in October 2019, the fourth title in the franchise allows you to live the adventures of three very different heroes: a wizard, a warrior, and a thief.

The best part of Trine 4, which makes it one of the best games to play in pairs, is how each character offers different solutions and abilities so you can defeat the bosses and work through the game’s puzzles. Access the link and call your partner to play it.

Factorio is a very different game, it offers a virtually infinite 2D map so that you and your duo can build a huge industry. This industry will be able to produce items, mine resources, and forge materials that can then be deposited on trains, which take them the industry elsewhere on the map.

With one more player, it’s much easier to build your automated industries, create train tracks, and delegate tasks to expand your business even more. Check out the game by accessing the page.

Chances are you’ve already heard of Garry’s Mod, a game that, well, isn’t exactly a game. It is best known as a platform where you can add different types of “mods” yourself to modify and include different ways to play.

Essentially, this physics-based Sandbox allows you to create your own fun – which makes it one of the best games to play in pairs. Garry’s Mod is one of the most highly rated games on Steam, go through the link and find out why.

Finally, having been released in 2019, Borderlands 3 couldn’t be left out of our list. The third title in the first-person shooter franchise brings even more fun to you and your friends.

In it, you can play with several different characters, find thousands of weapons, vehicles, and even giant robots. It’s worth checking it out on the game’s official page.

Did you find good games to play in pairs?

Among the various genre options we’ve presented, we hope you’ve found your next option for having fun together. So, what did you think of our list? Were there any good games that you think we should include missing? Tell us in the comments!